Zoo Atlanta is empowered to exhibit, interpret, study, and care for wildlife in superior environments, to conserve biodiversity throughout the world,  to educate, enlighten and entertain the public and to contribute to the cultural life of the community. It’s home to nearly 1000 animals. They live among the trees, in the hills, alongside streams and watering holes, in naturalistic habitats that look and feel like their homes in the wild. This encourages the animals to “act naturally”.

Atlanta’s oldest cultural attraction began the day a circus came to town – and never left. In March 1889, a traveling show bound for Marietta, Ga., stalled just south of its destination when cash flow problems forced its owner into bankruptcy. Left to languish in their cages by defecting circus employees, the animals began to draw crowds of curious onlookers. Two weeks later, businessman George Valentine Gress purchased the collection at public auction and donated the animals en masse to the city of Atlanta. City leaders relocated them to picturesque Grant Park, a favorite local picnic and promenade destination. Featuring a jaguar, a hyena, a black bear, a raccoon, an elk, a gazelle, a Mexican hog, lionesses, pumas, camels and snakes, Atlanta’s first zoological venue opened to the public that April.

In the mid 80’s Zoo Atlanta became interested to host a couple of giant pandas. Former President Jimmy Carter, who still had good contacts among the Chinese leaders, made a request on behalf of Zoo Atlanta during one of his trips to China.

In September 1987, Zoo Atlanta director Terry L. Maple was invited to Beijing by the Chinese Association of Zoological Gardens. When he left China, he returned to Atlanta with a short-term loan agreement. However, this short-term loan did not take place. The World Wildlife Fund had a lawsuit against the U.S. Fish & Wildlife Service on panda loans. And with the American Zoo Association supporting the WWF, this did not seem to be a good time for Zoo Atlanta to buck the trend.

Instead Zoo Atlanta started to think about a long-term loan model, which would be a better way to exhibit pandas. The U.S. Fish & Wildlife Service approved their application to import two giant pandas on June 15, 1999.

On November 5, 1999, Zoo Atlanta received a young pair of giant pandas from the Chengdu Research Base of Giant Panda Breeding. United Parcel Service (UPS) airlifted the pandas from Beijing to Atlanta on a 10 year breeding loan. Lun Lun & Yang Yang made their trip in a specially equipped and custom-painted Boeing 767 UPS cargo plane.

When Lun Lun & Yang Yang arrived at Zoo Atlanta in 1999, the Zoo build a brand new panda exhibit. You can visit the pandas at the The Arthur M. Blank Family Foundation Giant Panda Conservation Center. The public area contains 2 outside exhibits and 2 air conditioned rooms.

On June 17, 2009, Zoo officials launched Give So They Stay, a major fundraising effort to keep giant pandas in Atlanta. In the fall of 2009, Zoo Atlanta’s President and CEO, Dennis Kelly held discussions with officials in China to negotiate a new giant panda agreement. On December 8, 2009 Zoo Atlanta’s Board of Directors approved a new five year giant panda loan agreement.

YA LUN AND XI LUN ARE TURNING 1! 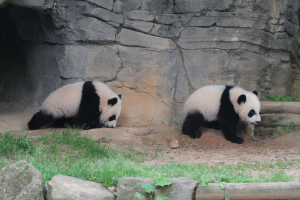 EVENT DATE(S):September 3 The only giant panda twins in the U.S. turn 1 on September 3, and you’re invited to their party! Double up for a holiday weekend packed with exclusive opportunities in honor of the twins, and join us for a birthday bash full of special surprises! All weekend long … From Saturday, September […] 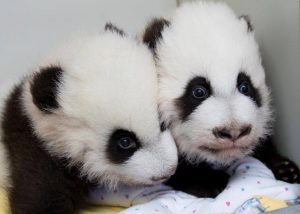 You may have heard the exciting news that the cubs finally have names: Ya Lun (Cub A) and Xi Lun (Cub B). And maybe they don’ know their names just yet, but in their world, they’re still continuing on track with their own set of milestones!   Source: Zoo Atlanta

A bamboo bon voyage to Mei Lun and Mei Huan 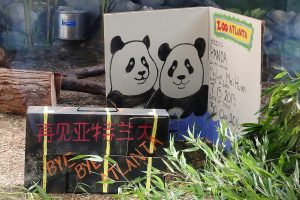 The newest giant panda twins at Zoo Atlanta are both female 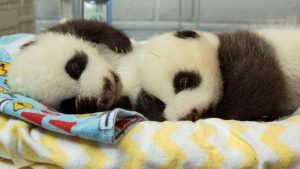 It’s a girl … and a girl! Lun Lun the giant panda is once again the mother of twin girls. The giant panda twins born on September 3, 2016, are both female, as has been confirmed by DNA testing. The tests were done by scientists at the Center for Conservation Genomics at the Smithsonian Conservation […] 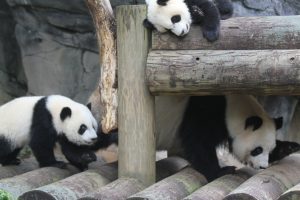 Mei Lun and Mei Huan, the first surviving pair of giant panda twins ever born in the U.S., will depart Atlanta on November 3, 2016, for the Chengdu Research Base of Giant Panda Breeding in China. In one of the most important milestones in the life of an American-born panda, the twins, now 3 years […]