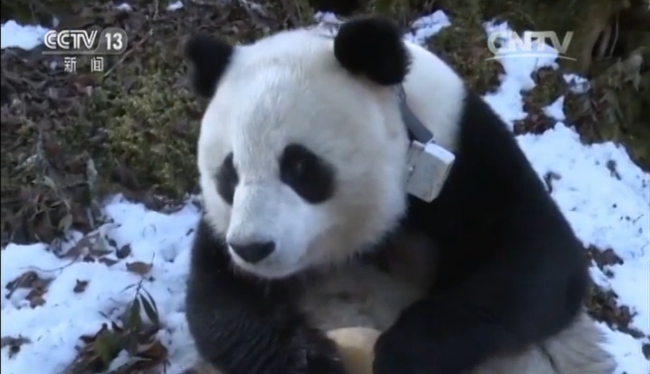 Chinese researchers confirmed that Caocao, a female giant panda in captivity, has completed natural mating with a wild male companion on March 23, 2017, which marks the first such instance in the world and is regarded as a breakthrough in the country’s panda breeding.

On March 27, researchers with the China Conservation and Research Center for the Giant Panda (CCRCGP) reclaimed a voice recorder installed in the collar of Caocao, a subject of the organization’s wild mating trial program. Caoao was released into the wild early in March, in a field monitor station in the Wolong National Nature Reserve in southwest China’s Sichuan Province.

Researcher recently announced that Caocao mated for 90 seconds with a wild male giant panda on March 23.

Previously a wild panda, Caocao was reportedly found injured and rescued by researchers in 2003, when the then cub was only months old.

According to Zhang Hemin, Deputy Director of the CCRCGP, China’s captive panda breeding program has witnessed an increasing population for the species but how to enhance the pandas’ genetic vitality and diversity under artificial propagation remains a challenge.

The center hopes that its captive-bred giant pandas released into the wild could mate with wild companions, thus bringing new blood into their existing group.

So far, China has 471 captive pandas, and most of them succeeded in mating via artificial intervention in the past years.