Panda Poop Microbes Could Make Biofuels of the Future 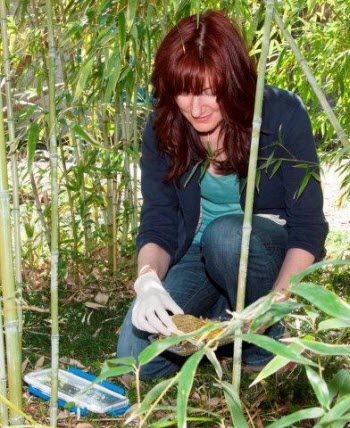 Unlikely as it may sound, giant pandas Ya Ya and Le Le in the Memphis Zoo are making contributions toward shifting production of biofuels away from corn and other food crops and toward corn cobs, stalks and other non-food plant material.

Scientists presented an update today on efforts to mine Ya Ya and Le Le’s assets for substances that could do so during the 246th National Meeting & Exposition of the American Chemical Society (ACS), the world’s largest scientific society. And if things work out, giant pandas Er Shun and Da Mao in the Toronto Zoo will be joining the quest by making their own contributions.

“The giant pandas are contributing their feces,” explained Ashli Brown, Ph.D., who heads the research. “We have discovered microbes in panda feces might actually be a solution to the search for sustainable new sources of energy. It’s amazing that here we have an endangered species that’s almost gone from the planet, yet there’s still so much we have yet to learn from it. That underscores the importance of saving endangered and threatened animals.”

Brown and her students, based at Mississippi State University, now have identified more than 40 microbes living in the guts of giant pandas at the Memphis Zoo that could make biofuel production from plant waste easier and cheaper. That research, Brown added, also may provide important new information for keeping giant pandas healthy.

Ethanol made from corn is the most common alternative fuel in the U.S. However, it has fostered concerns that wide use of corn, soybeans and other food crops for fuel production may raise food prices or lead to shortages of food.

Brown pointed out that corn stalks, corn cobs and other plant material not used for food production would be better sources of ethanol. However, that currently requires special processing to break down the tough lignocellulose material in plant waste and other crops, such as switchgrass, grown specifically for ethanol production. Breaking down this material is costly and requires a pretreatment step using heat and high pressure or acids. Brown and other scientists are looking for bacteria that are highly efficient in breaking down lignocellulose and freeing up the material that can be fermented into ethanol.

Bacteria in giant panda digestive tracts are prime candidates. Not only do pandas digest a diet of bamboo, but have a short digestive tract that requires bacteria with unusually potent enzymes for breaking down lignocellulose. “The time from eating to defecation is comparatively short in the panda, so their microbes have to be very efficient to get nutritional value out of the bamboo,” Brown said. “And efficiency is key when it comes to biofuel production — that’s why we focused on the microbes in the giant panda.”

Working with scientists at the University of Wisconsin-Madison, Brown’s team identified bacteria that break down lignocellulose into simple sugars, which can be fermented into bioethanol. They also found bacteria that can take those sugars and transform them into oils and fats for biodiesel production. Brown said that either the bacteria themselves or the enzymes in them that actually do the work could be part of the industrial process.

“These studies also help us learn more about this endangered animal’s digestive system and the microbes that live in it, which is important because most of the diseases pandas get affect their guts,” said Brown. “Understanding the relationships between the microbes and the pandas, as well as how they get their energy and nutrition, is extremely important from a conservation standpoint, as fewer than 2,500 giant pandas are left in the wild and only 200 are in captivity.”

Additional plans include expanding the work to include samples from red pandas at the Memphis Zoo, which also eat bamboo. Brown and colleagues also are forging a collaboration to get samples of feces from giant pandas that arrived in the Toronto Zoo earlier in 2013.