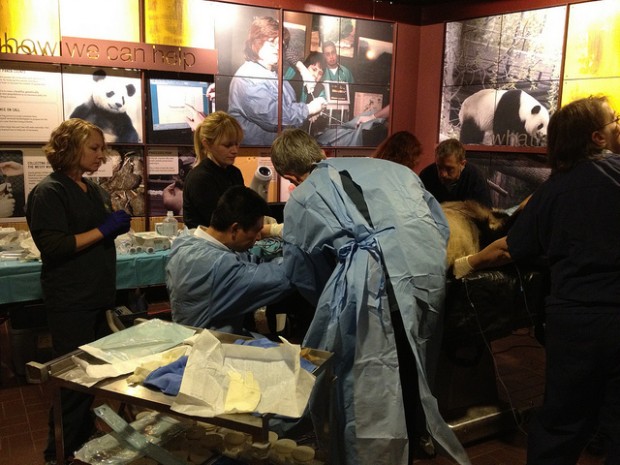 Spring has sprung and the giant pandas are breeding again at the Smithsonian’s National Zoo. Scientists detected a rise in urinary estrogens on March 26, 2013 in its female giant panda Mei Xiang. This rise and her behaviors indicated that Mei Xiang was in estrus and ready to breed. A team of Zoo scientists and veterinarians, including Tang Chunxiang, the assistant director and chief veterinarian of the China Conservation and Research Center for the Giant Panda at Wolong, performed an artificial insemination (AI) earlier this morning after keepers determined no competent breeding between Mei Xiang and the Zoo’s male giant panda Tian Tian had occurred overnight. 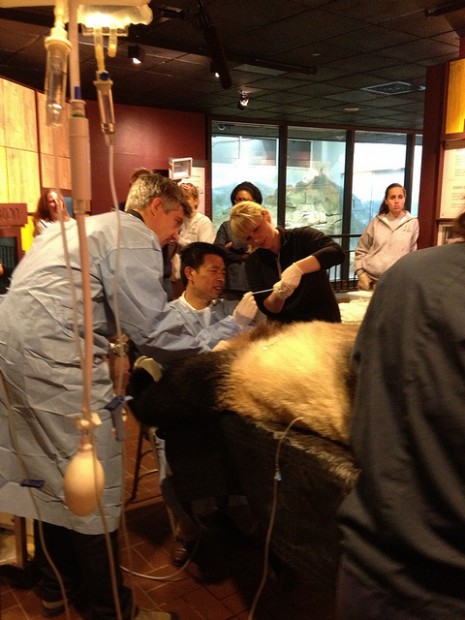 “We are hopeful that our breeding efforts will be successful this year, and we’re encouraged by all the behaviors and hormonal data we’ve seen so far,” said Dave Wildt, head of the Center for Species Survival at the Smithsonian Conservation Biology Institute. “We have an extremely small window of opportunity to perform the procedures, which is why we monitor behavior and hormones so closely.”

Mei Xiang was put under general anesthesia for the artificial insemination and will likely undergo a second procedure later today. During the artificial insemination, the team of scientists and veterinarians used a combination of fresh semen collected from Tian Tian early this morning and frozen semen collected from Tian Tian in 2003.

The David M. Rubenstein Family Giant Panda Habitat, which has been closed since March 26, will reopen tomorrow, March 31. Visitors to the Zoo today should not expect to see the pandas. In the meantime panda fans can watch Mei Xiang and Tian Tian on the panda cam, sponsored by the Ford Motor Company Fund, except during an artificial insemination.

The Zoo’s plans for breeding Mei Xiang and Tian Tian were developed in accordance with the Giant Panda Cooperative Research and Breeding Agreement, which lasts until 2015. Tang traveled to the Zoo to assist with breeding as part of the agreement. He performed two artificial inseminations on Mei Xiang alongside a team from the Zoo in 2011.

Zoo scientists will monitor Mei Xiang’s hormone levels in the coming months and conduct ultrasounds to determine if she is pregnant. A pregnancy lasts between 95 and 160 days. Female giant pandas experience delayed implantation, during which the embryo does not implant in the uterine wall until a few weeks before birth and a fetus does not start to develop until the final weeks of gestation. It is impossible to determine from behaviors and hormone analyses alone if a female is pregnant or experiencing a false pregnancy (pseudopregnancy).