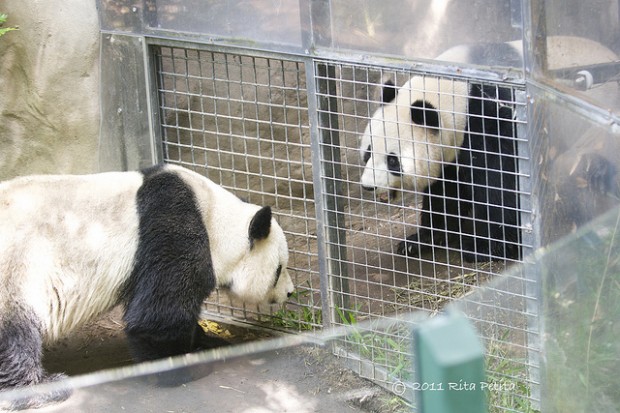 Gao Gao & Bai Yun, San Diego Zoo’s panda couple, mated last week. They have proved their good breeding skills in over the last eight years and they have already 4 children together (Mei Sheng, Su Lin, Zhen Zhen & Yun Zi). The San Diego Zoo is hoping that they will produce a fifth offspring this year.

Here are some breeding updates from last week:

As we get closer to our hoped-for breeding window, we are seeing some great behavior from giant panda Gao Gao. For the first time in a couple of years I saw him perform a handstand scent mark, and the crowd went wild for it! He also has been eating quite a bit more, which is normal for him at this stage. He is climbing into the tree to take good whiffs of that panda next door. Climbing, in itself, is something different for Gao Gao, since he’s never been much of a climber and really prefers to stay on the ground.

Now that the adult pandas have swapped enclosures, researchers are carefully observing their behavior. As a panda narrator, I can help out by watching the bears and reporting on how many times they scent marked or any behavior or vocalizations that may be important for our research team to know.

For now, Gao Gao continues eating away and gaining weight. (I think he remembers our Bai Yun is a little bigger than he is!) Also, males in the wild would begin to compete for breeding rights with other males at this time of year, and they want to be at their full weight and have enough strength to compete with possibly older, dominant males. Luckily for our Gao Gao, he doesn’t have to compete, but it never hurts to be on your best game and looking your best for a pretty girl!

The San Diego Zoo is full of the promise of spring, and our female giant panda Bai Yun is dealing with changing hormone levels. Bai Yun really doesn’t have a “normal” day right now, and there is no set schedule to her activities or direct reason for it! There are days when Bai Yun is peacefully sleeping and really doesn’t want to do anything, days when she eats non-stop and can’t seem to get enough of her bamboo, and days where she doesn’t seem to know what she wants and doesn’t want anyone to bother her.

The scent marking and different moods she presents to her audience also fluctuate with those days. During this time we do our best to observe those behaviors, and our giant panda research team has this down to a science. However “off” she might be on some days, she has been fantastic at letting our reproductive physiologist and vets collect vaginal swabs, and she has been great at supplying urine samples for our keepers to collect. Often when I talk to our guests about how much we do during Bai Yun’s breeding season, they laugh and can’t believe that we go do so much for a “bear.” Smiling in return, I remind them how successful we’ve been at not only breeding our bears but understanding their cycles and knowing their timeline.

Yes, it’s a lot of work, and some days our keepers are running around getting other work done and can’t always watch the bears as often as they’d like to do. The great thing about our team at the Giant Panda Research Station is that we panda narrators help where we can, even if it’s something as simple as watching how long the pandas eat or counting how many times they scent mark in an hour.

We will do our best to keep you all updated on our progress with the bears, but we can’t offer an exact date of when or if they will breed. There are times where they surprise us as well!

Breeding season is here, and the pandas have been as active as ever. The keepers continue to switch Bai Yun and Gao Gao’s exhibits, so the pandas are investigating their “new” areas vigorously. Bai Yun has been scent marking and bleeting like crazy. When she’s not walking around the exhibit she is either eating or napping. On Saturday, she napped for a few hours on top of the rock structure in her exhibit, and on Sunday she was staying in her bedroom for a while. I was surprised she was in there because the keepers had just replenished her food supply.

Gao Gao has also been active in his exhibit. He spent a lot of his time in the tunnel, where he napped and called for Bai Yun. At one point she did come over to the gate, where they sniffed each other. On Sunday, Gao Gao was entertaining Zoo guests when he found a gopher and decided to play with it and tossed it in the air. Fortunately, the gopher scurried back into its hole unharmed.

It has definitely been an exciting few days at pandas, and I’m sure more excitement is to come!

Update: The first breeding of this season for our panda pair occurred at 2:45 p.m. on April 15 (exactly two years after their first breeding of 2009)! Staff will continue to monitor Bai Yun, and give Gao Gao access to her if she seems willing, through the rest of the weekend. The main viewing exhibit will be closed to Zoo guests through Sunday, April 17.

Panda Bai Yun has spent the week slowly building toward the peak of her estrus here at the San Diego Zoo. In the last few days, she had begun to vocalize, first rarely, then more frequently. She began chirping at our male, Gao Gao, through the howdy gate, although she allowed only brief flirtations before she would retreat to her exhibit space or crossed the line to aggressive barks and even paw swats that let him—and us—know that it wasn’t yet time for mating.

Today we saw her perform a spontaneous tail-up and do a little estrus rolling, suggesting she was very close to that breeding window. We closed the exhibit to allow the pair some privacy and quiet as they communicated across that howdy gate. Bai Yun settled into a pattern of resting briefly, then getting up and wandering to the howdy gate, interacting with our male, then returning to rest. Each time she awoke, her estrus behavior grew a little stronger.

Finally today at about 2:45 p.m. she allowed him to touch her through the gate. He nibbled at her flanks as she chirped. She occasionally gave a tail-up response and finally dropped her shoulders to the ground in the lordosis posture we associate with good breeding position. At that point we opened the howdy gate and allowed the pair to have access to each other.

After a few short minutes of positioning, Bai Yun and Gao Gao succeeded in mating. The pair broke up their embrace and separated easily, each returning to their own yard for a rest.

We may try another breeding if the bears are in the mood and show appropriate behavior. In the meantime, we are once again struck by how picture perfect our breeding pair is when it comes to the mating act. They really have it down to a science. Well done, Bai Yun and Gao Gao!