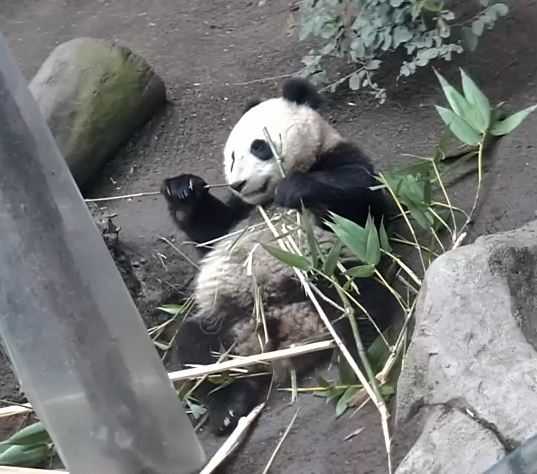 When a giant panda cub is totally weaned from his mother in the wild places of China, one of two things likely happens: either his mother runs him off with aggressive behavior, as has been noted with some brown bears, or the mother and cub simply wander away from each other and begin separate lives. Many panda fans worry that that final weaning event is a sudden change for the bears, but in reality it is the culmination of a longer process that begins some months before, when the cub develops his bamboo-feeding dentition.

At about a year of age, the cub’s diet changes from one of 100 percent maternal milk to one incorporating his staple adult food, bamboo. He starts by feeding on small quantities of leaf, mastering the process of chewing and swallowing a solid food. Gradually, the cub ingests more and more bamboo and needs less caloric support from mother’s milk. By the time a final weaning separation occurs, he may only have been nursing once a day, or even skipping days between suckling bouts. The development of this nutritional independence takes time, and thus, weaning is not accomplished overnight.

Xiao Liwu turned 18 months old on January 29, 2014, and we have begun preparations for weaning him from his mother, Bai Yun. Many of you have noticed changes in the access given to our mother-cub unit, as they are now regularly seen exploring both the left- and right-hand exhibits. We have opened the door between these two usually separate spaces, allowing the pair to freely explore either side, moving independently or together as they see fit. This is an opportunity for both animals to become comfortable with the right-hand exhibit, which Bai Yun hasn’t seen in nearly two years; the cub has never experienced it before.

During this period we will be watching the pandas to see how they are utilizing this newly enlarged space. Do they spend more time in close proximity or separate? Does the cub follow his mother everywhere or explore alone? Does Bai Yun seem to move away from her cub when he approaches? The answers to these questions will tell us more about Bai Yun and Xiao Liwu’s readiness for weaning and will inform our decision-making as we move through this process. We aren’t in any rush here.

The weaning period is sometimes a difficult one for our blog readers and panda fans. There is often concern about the well-being of our bears during this time. Bear in mind, however, that a zoo setting is unlike a wild one in that there are barriers to animal dispersal. Simply put: our animals reside in enclosures, and they are not free to wander away from each other as they might in the wild. We have to help them adhere to their natural tendencies by opening up new spaces.

By making changes to the access our bears have to the spaces around them, and to each other, we are facilitating a natural process that is taking place in wild habitat even as we speak. In doing so, we are respecting the health and well-being of both mother and cub, guided by the best practices that biology, science, and husbandry allow.