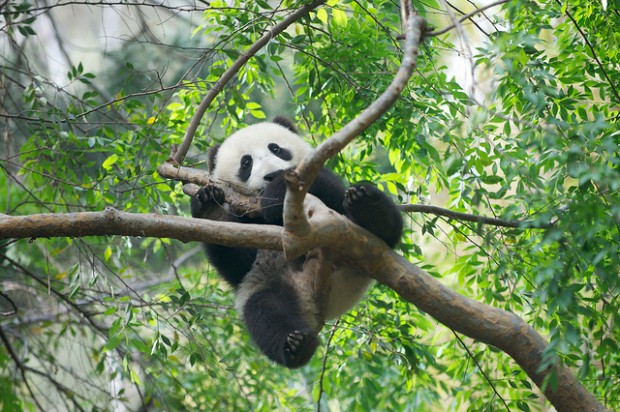 For a couple of weeks now pandas Xiao Liwu and Bai Yun have been in the front/main viewing area of the San Diego Zoo’s Panda Trek. The cub is extremely good at climbing up to the top of the pine tree and has even found a spot that previous cubs would frequent to take a nap. I think moving to the new exhibit was definitely an adjustment for the cub. He now seems to have a good handle on being out all day in front of his adoring public.

I know for our visitors it can be a little disappointing coming through the line to only see a distant little fur ball, but as we always say, “The bears run the show.” As a panda narrator at the exhibit, I am often asked when the cub will come down or at what time is he more active, but I can guarantee you that there is no schedule for little Wu and mother Bai Yun! Please be patient and realize that this is normal for him to spend the majority of his time at this age in the trees, just like our previous cubs.

Bai Yun has adjusted beautifully living back in the front. I always remind people that she hasn’t been in the front since July. She has found those favorite spots of hers again and has discovered a couple of new positions to sleep in them. One of her favorites is sleeping in Yun Zi’s old hammock with her head hanging over the side. Bai Yun is staying steady weight at about 230 pounds (Xiao Liwu is 27.8 pounds) and is doing a great job with the cub. He comes down from the pine tree on his own to nurse from her, and occasionally I’ve heard her call to the cub to come down.

I want to assure everyone that Bai Yun is doing everything a panda mother should. She is a fantastic mother, not neglectful or overly aggressive. Something I joke about with staff is that this cub doesn’t get her roughhousing nearly as much as Yun Zi did; Yun Zi liked to poke Mom a lot! Our staff watches Bai Yun on Panda Cam as well, and while the Zoo is open, there is always someone out in the queue watching. In the 14 years that Bai Yun has had a cub with her, we have never had to intervene or raise a cub for her, and we are constantly amazed at what she has shown us through the years here at the San Diego Zoo.

Anastasia Horning, a panda narrator at the San Diego Zoo.