Po can stay with Lun Lun until he becomes 2,5 years old 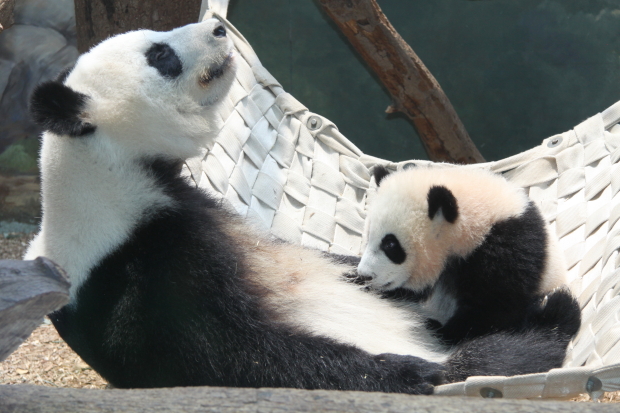 Zoo Atlanta announced today that Po can stay with Lun Lun until he is 2,5 years old. Here is the official update by Zoo Atlanta’s Curator of Mammals, Rebecca Snyder:

For our previous cubs, Mei Lan and Xi Lan, February was when we started the weaning process because they were nearing 18 months of age, which is the species-typical age for giant panda weaning. That’s not the plan for Po. He was born unusually late in the year for a giant panda (November 2010), and so he will not be 18 months old until May. If we started the weaning process in May, it would be too late to expect Lun Lun to cycle in spring, which is the normal giant panda breeding season. Giant pandas do occasionally breed outside of spring, but it’s not the norm for the species and we would prefer for Lun Lun to stick to the normal schedule. So, we are not planning do anything to wean Po this year. Giant panda cubs in the wild sometimes stay with their mothers for up to 2.5 years. Our plan is for Po to have this extra time with his mom. We won’t start the weaning process until January or February 2013. However, Lun Lun might have a different plan. She might decide to wean Po this year on her own. That’s okay and we’ll let her make that choice. It will provide a nice case study for us to document that weaning process. We are prepared for whichever scenario Lun Lun chooses and it will be interesting to see what happens. I am happy for Po that he gets some extra time with his mom. I hope you will be happy for him too and won’t be too disappointed if we don’t have another cub until late summer or early fall of 2013.