In June 2012, a deal was signed by the China Wildlife Conservation Association and the Malaysian government to loan a pair of pandas, Feng Yi and Fu Wa, to mark the 40 years of China-Malaysia diplomatic relations in 2014.

Natural Resources and Environment Minister Datuk Seri Douglas Uggah Embas said the Cabinet decided on December 19, 2012 to house the pandas at Zoo Negara instead of Putrajaya’s Wetlands Park after considering feedback from various organisations and the public.

“We feel Zoo Negara has better equipment and facilities to care for the pandas.

“The complex construction will begin in July 2013, and we hope to complete it by April 2014 so the pandas can be brought here a month later,” he said during a visit to Zoo Negara.

The complex will be built on a 0.6ha space within the zoo, with internal temperatures ranging from 22°C to 24°C and an environment that emulates the pandas’ original home of Sichuan province, China.

Uggah added that RM15mil of the RM25mil required to build the complex would be forked out by 1Malaysia Development Berhad while the rest would be borne by the Malaysian Government.

“Zoo Negara will bear the costs of maintaining the pandas during their 10-year stay,” he said.

Zoo Negara president Datuk Zaharin Arif said a technical team would be formed from their experienced staff to manage the pandas.

“We will send some officers for training in China while trainers from China will come here to educate our staff on how to care for the pandas,” he said. 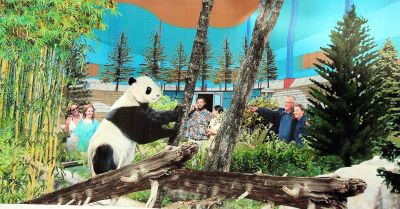 Press Conference on the relocation of the Panda habitat from Wetland to Zoo negara.
Artist impression of the Exhibits Giant Panda to be built at Zoo Negara.