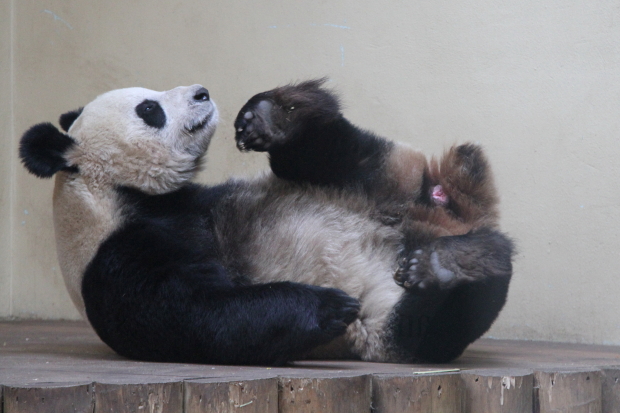 The panda breeding season is drawing to a close this year at Edinburgh Zoo, and although the furry pair have hit it off and have a definite attraction, no full mating has been seen to date. The pandas will have one or two final meetings later this afternoon and potentially early this evening, however chances of the panda pair achieving a successful mating this year have decreased.

At 9am on Tuesday 3rd April the panda cams were turned off and the indoor enclosure was lifted for Tian Tian (Sweetie) and Yang Guang (Sunshine) to meet properly for the first time. Amidst much excitement, most of it from the pandas, the two met. The pair then met several times over the course of yesterday and today.

Based on a combination of hormone testing and behavioural observation over several weeks, experts decided the time was now right for Tian Tian and Yang Guang to meet. And, although they did not end up fully mating, the experience for the two pandas and Edinburgh Zoo has been immeasurable.

Iain Valentine, Director or Research & Conservation, said:
“Each time the pair met we saw a huge amount of eagerness and attraction between Tian Tian and Yang Guang. There was lots of vocalisation and encouragement from our female and physical contact between the two. He mounted her several times, however full mating did not occur. Although both have bred before and have borne cubs with other pandas, they are both still relatively inexperienced.

“At the end of the day, this is year one of a ten year conservation project here at Edinburgh Zoo. We are hugely encouraged by how much the natural sparks flew between the two animals, as like humans, not all male and female pandas are attracted to each other. Both were keen to mate, but their inexperience showed.

“Baby cubs would have been a bonus this year, but we have to appreciate that the pandas have only just arrived and have had limited time to settle.

“Overall, we remain very pleased with the outcome of the last few weeks and it has been a fantastic trial run here at Edinburgh Zoo. As animal conservationists and scientists, we have learnt a huge amount in such a short time about this captivating species and we look forward to the next ten years.”