CCRCGP Wolong He Tao Ping Base

CCRCGP Wolong He Tao Ping Base 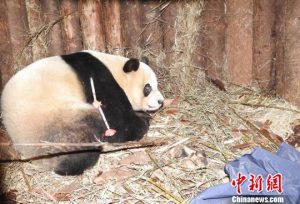 Staff of a CCRCGP on Thursday recaptured giant panda Tao Tao, who was released in the Liziping Nature Reserve in 2012, to monitor his physical condition. Tao Tao was found in good health and weighed 115 kilograms after being thoroughly examined by a group of vets from the China Conservation and Research Center for Giant […]

Ying Xue & Ba Xi were released in the wild 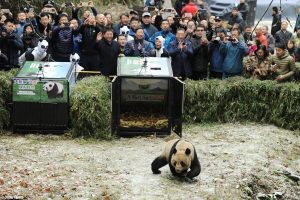 2 giant pandas born in 2015, Ying Xue and Ba Xi, were released into the wild at the Liziping Nature Reserve in Shimian county, Sichuan province, on November 23, 2017, marking the second time that two giant pandas have been released at the same time. They were released after more than two years of training […] 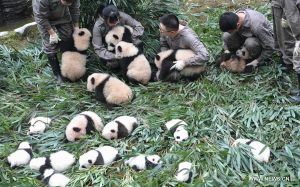 The China Conservation and Research Center for the Giant Panda has celebrated the birth of a record 42 panda cubs this year. The 42 cubs were born to 30 mothers. The 17 born at the Ya’an Bifengxia base made their debut Friday. The others met the public at the Wolong Geng Da base. “The number […]

The first panda cub produced by mating a female living in captivity with a wild male was born in Sichuan province in the early hours of July 31, 2017. The cub weighed 216 grams, much heavier than the average 150 grams for a newborn, according to Zhang Hemin, deputy executive director of the China Conservation […]

Hua Yan and Zhang Meng were reintroduced in the wild 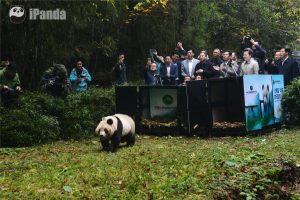 On October 20, 2016, Hua Yan and Zhang Meng were reintroduced in the wild one after another into the dense forest of Liziping Nature Reserve in Shimian County, Ya’an City to start their lives in the wild. Reintroducing the two female pandas at the same time into the wild is the first time multiple pandas have […]