The winners of the annual Giant Panda Global Awards were revealed today.

Panda fans from around the world were invited to vote for their favorite pandas, people and institutions from January 6 until February 3, 2016.

The launch of the fourth edition of the Giant Panda Awards followed after the rebrand of one of the world’s most famous panda conservation education websites, www.GiantPandaZoo.com into www.GiantPandaGlobal.com.

183.943 votes were registered during the one-month online voting in 10 categories. The highest amount of voters came from the United States of America, China, including Hong Kong, Macau, Taiwan, Canada, Malaysia, Thailand, France, the United Kingdom, Austria, Japan, Germany and Spain.

And here are the winners: 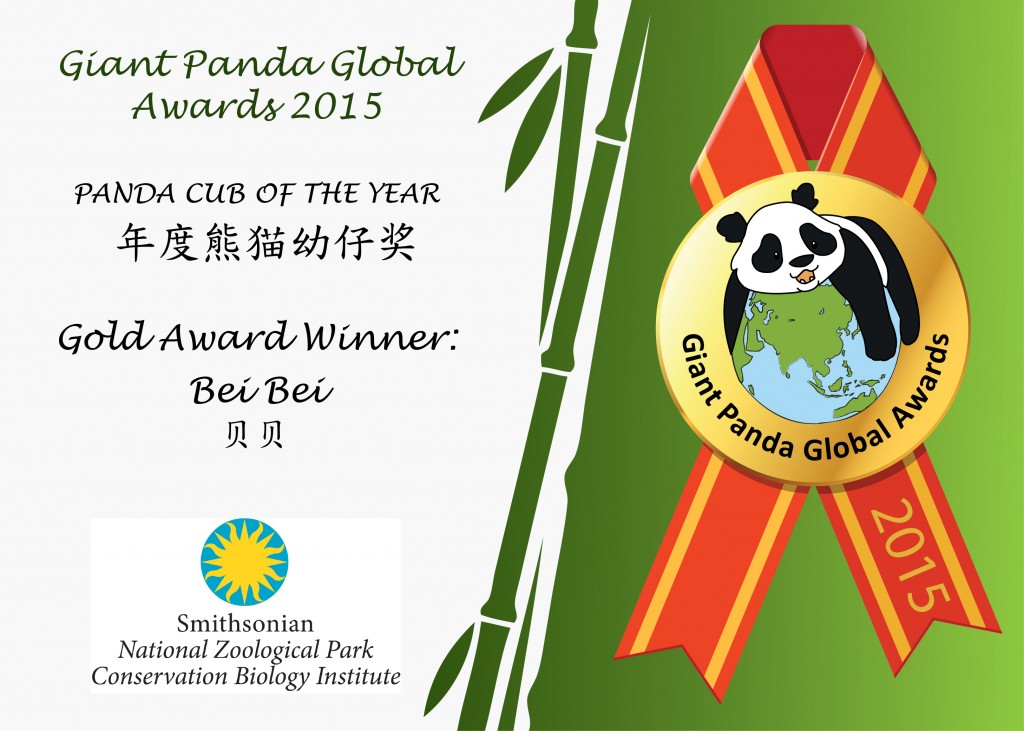 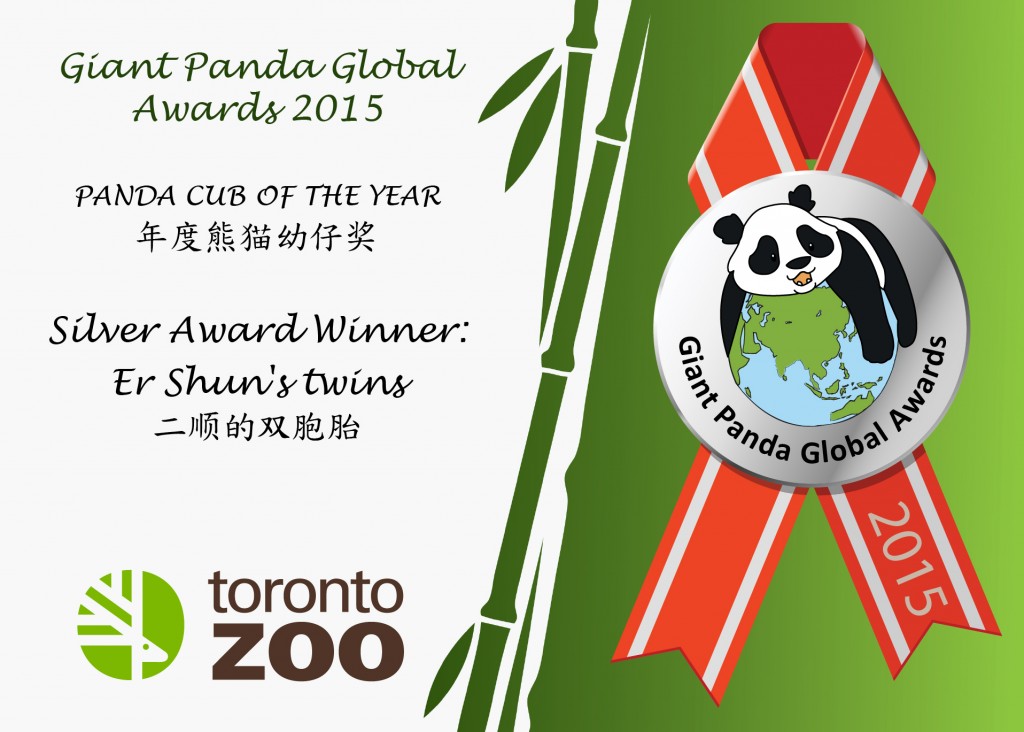 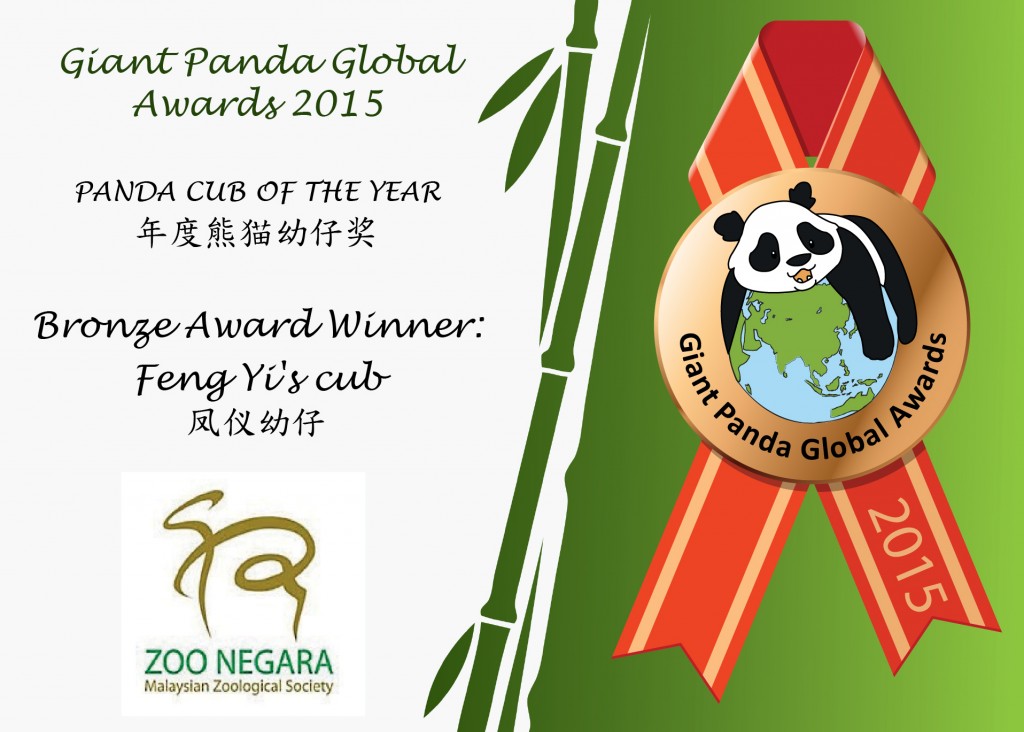 Fuzhou Panda World’s Basi won the Gold Award as “Favorite Panda in China” for the third time in four years. The Silver Award goes to the world’s only surviving panda triplets Ku Ku, Meng Meng & Shuai Shuai, who live at the Chimelong Safari Park in Guangzhou. CCRCGP’s Wu Wen, who will move to Ouwehands Dierenpark Rhenen in the Netherlands in the future, finished on the third place. 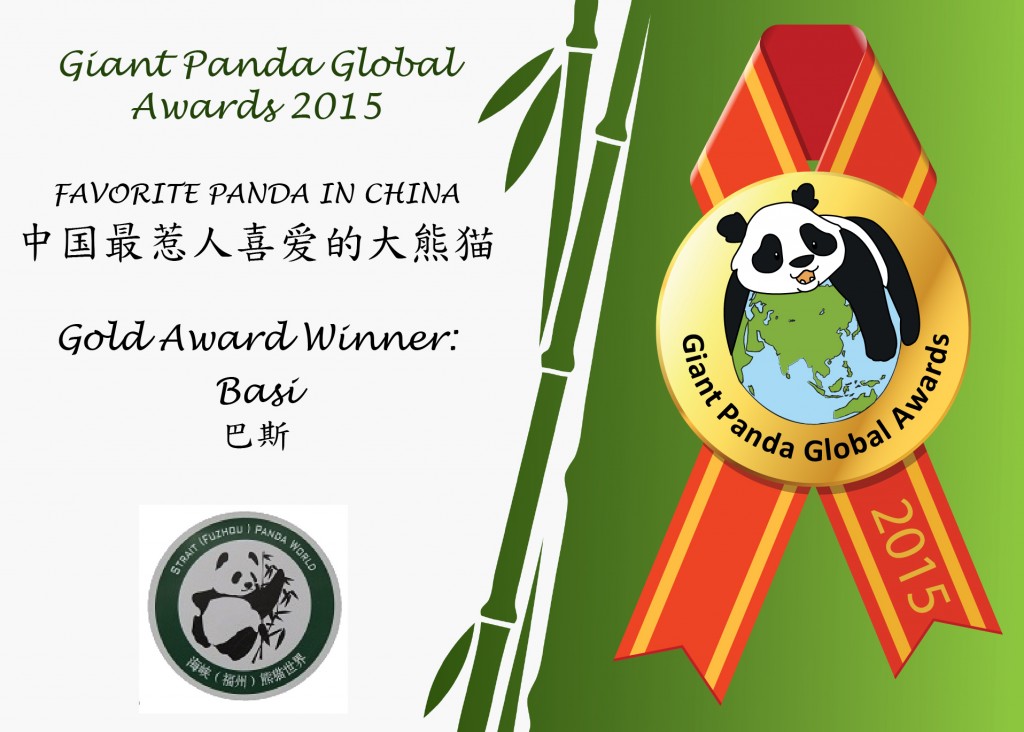 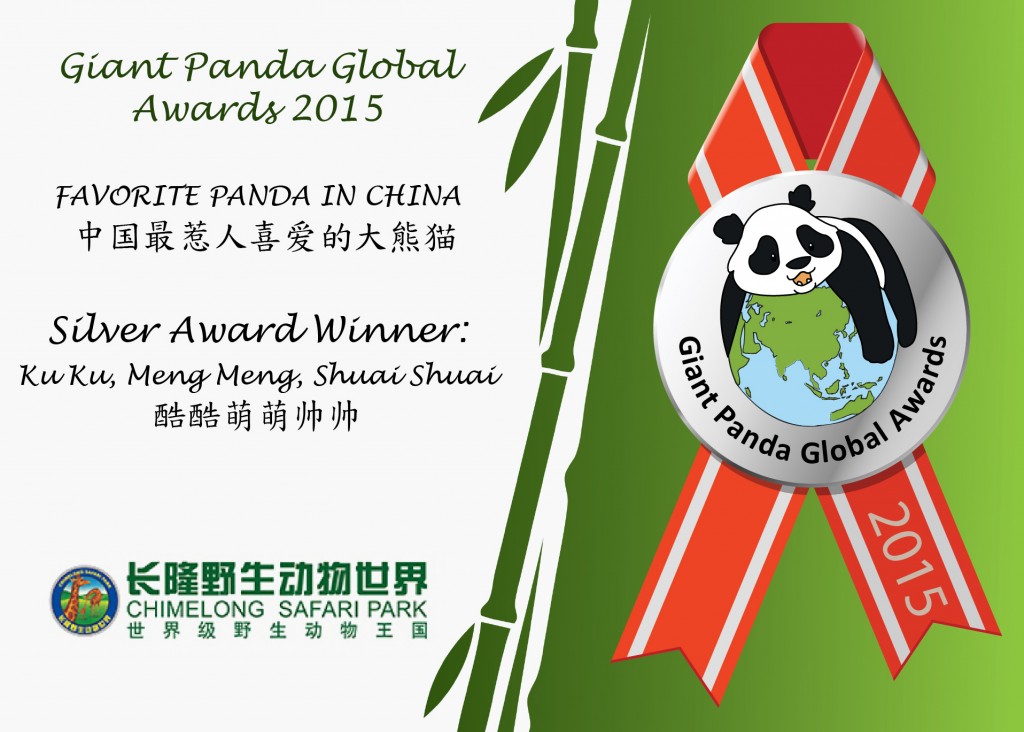 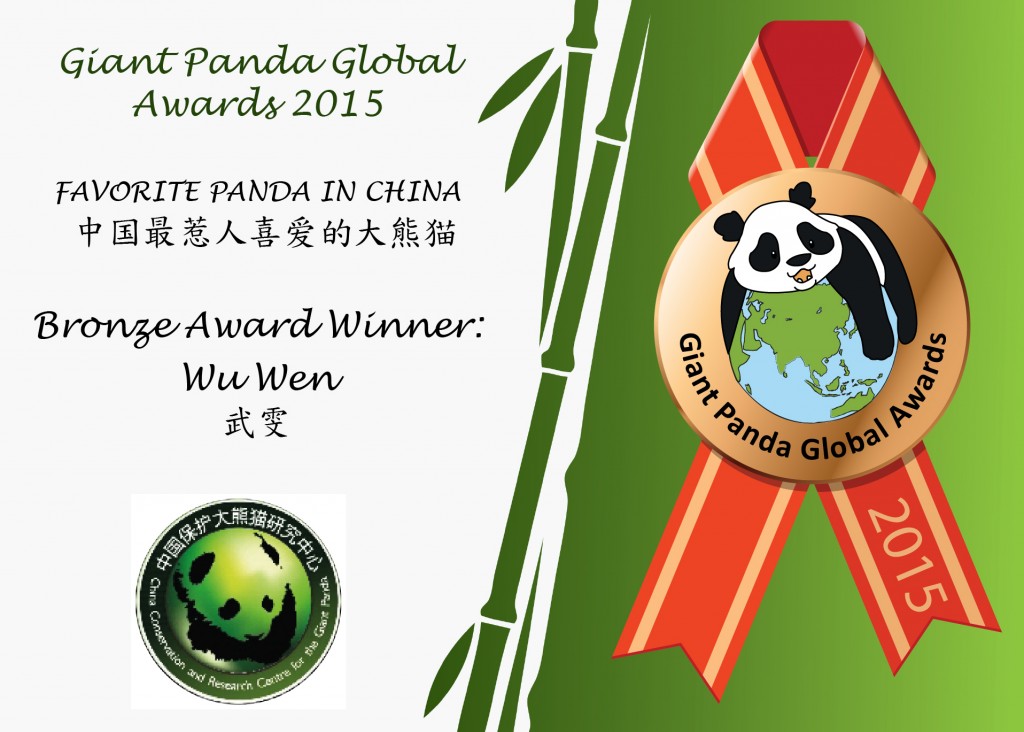 Xiong Bang (Yu Hin in Japanese) was the first giant panda born at Adventure World Wakayama in Japan to return to the Chengdu Panda Base. He won the Bronze Award as “Favorite Returned Panda”. Lin Bing (Lin Ping in Thai), who was born at the Chiang Mai Zoo in Thailand, became a mother for the first time in 2015 and finished on the second place. Lin Bing is taking care of her twins at the Ya’an Bi Feng Xia Base of CCRCGP, the Gold Award went to a panda who returned from Tiergarten Schönbrunn / Zoo Vienna in Austria to the Du Jiang Yan Base of CCRCGP: Fu Bao. 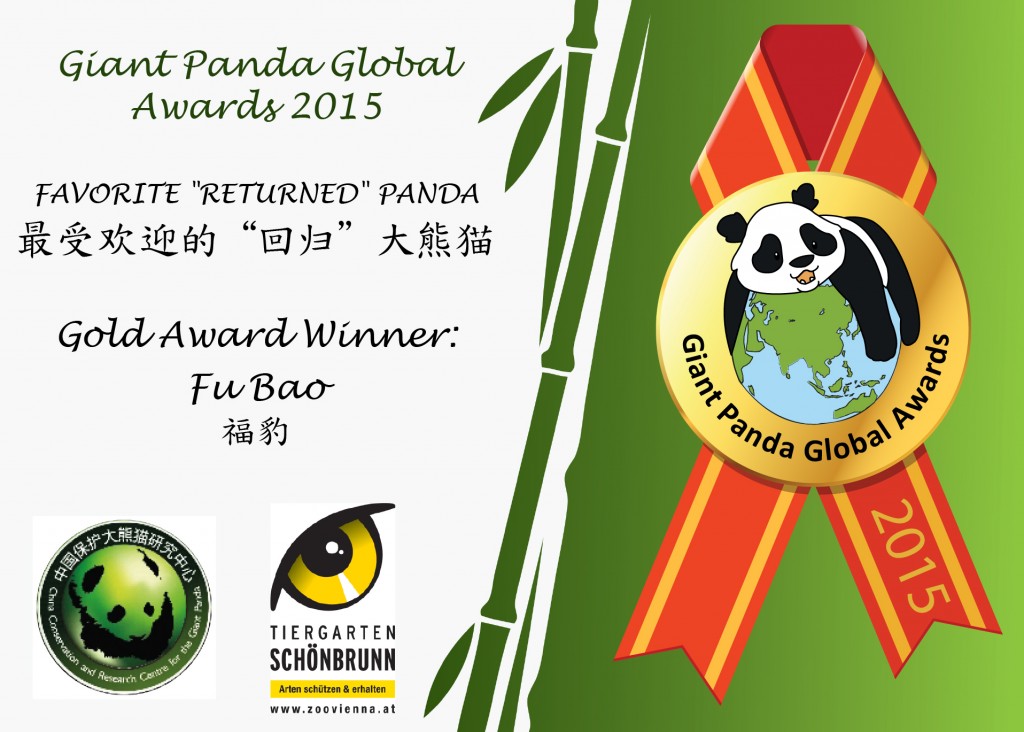 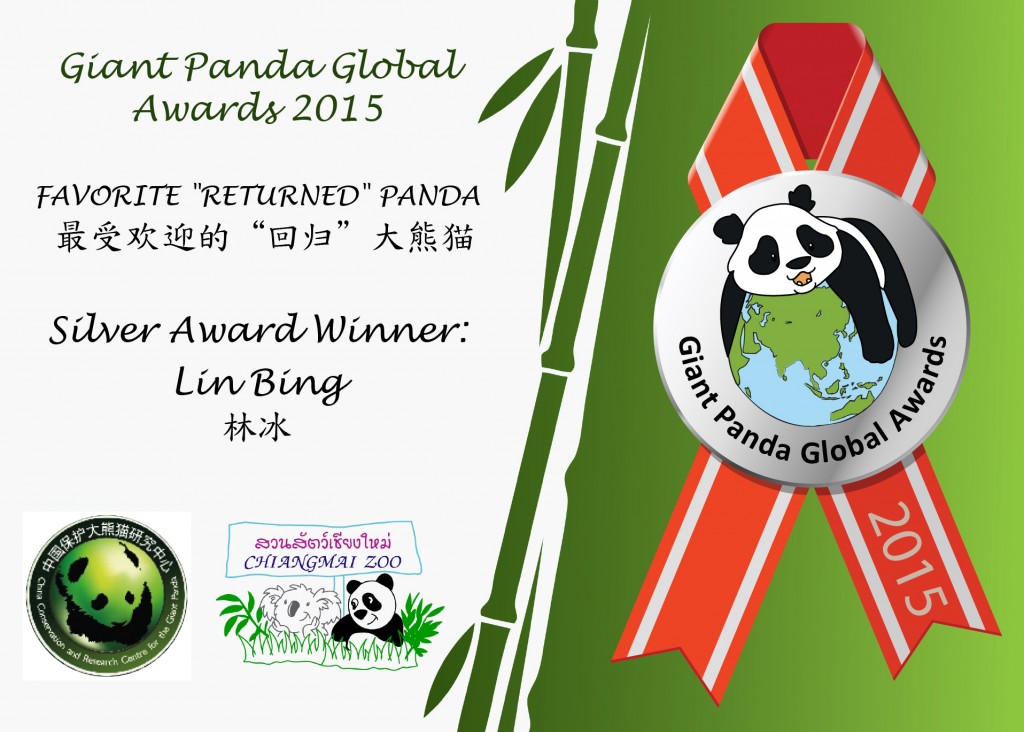 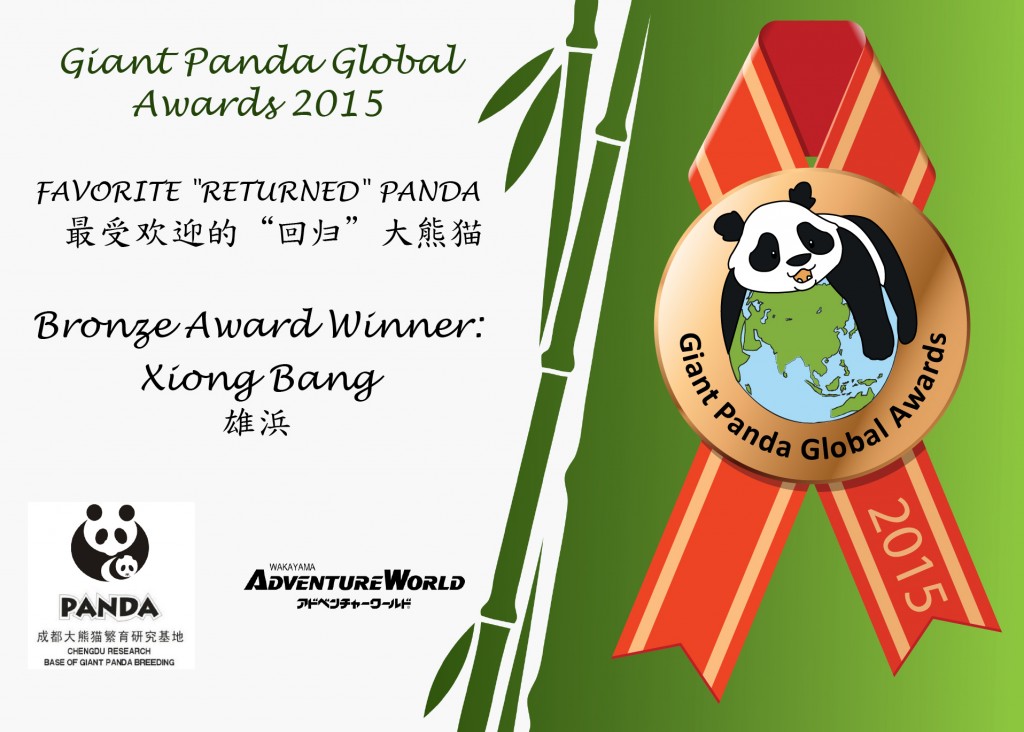 ZooParc de Beauval’s female Huan Huan will take the Bronze Award in the category “Favorite Panda Outside of China” to France. Silver goes to Bei Bei’s older sister Bao Bao at the Smithsonian’s National Zoo in Washington DC, USA. The Gold Award goes to Thailand for Chiang Mai Zoo’s male Chuang Chuang. He is the first male panda to win this award. 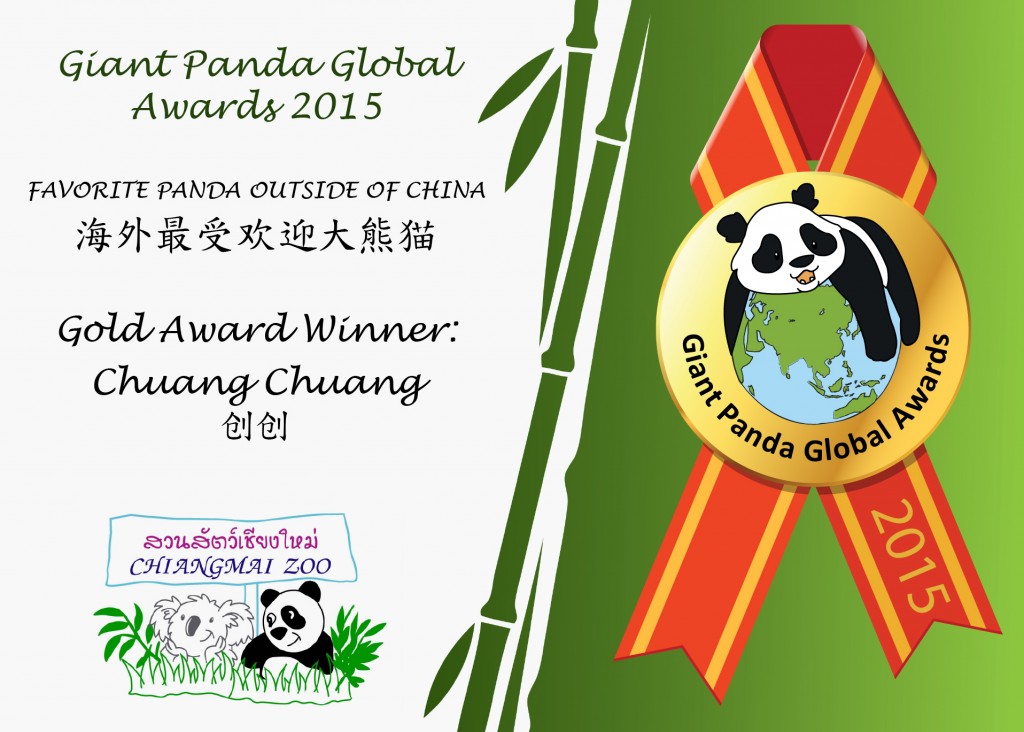 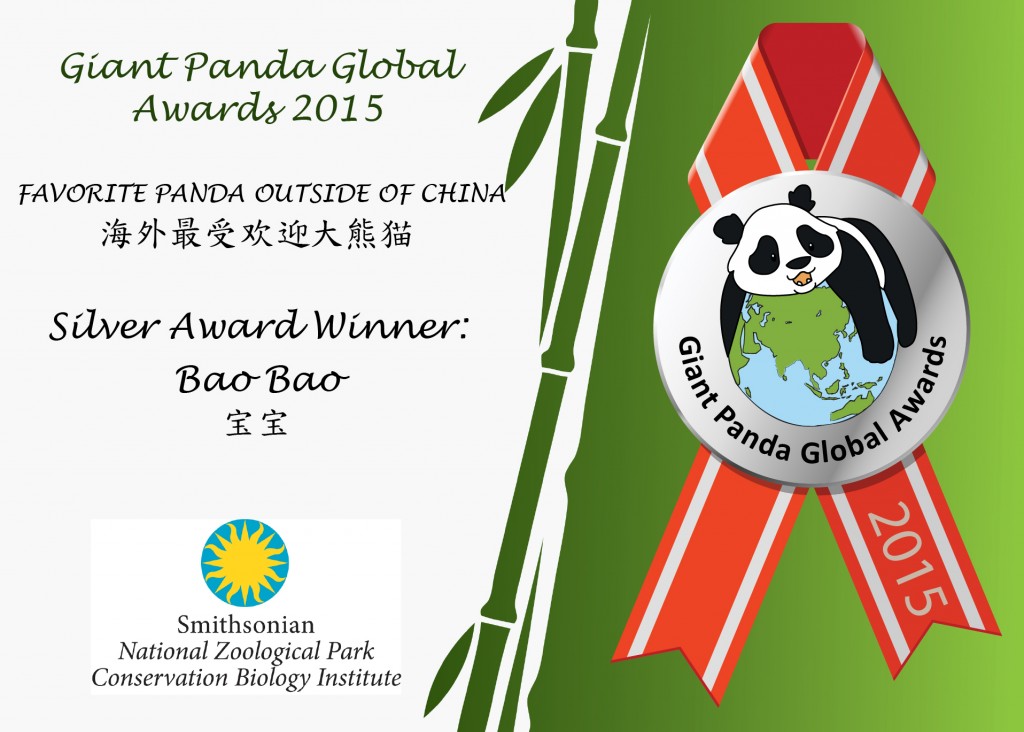 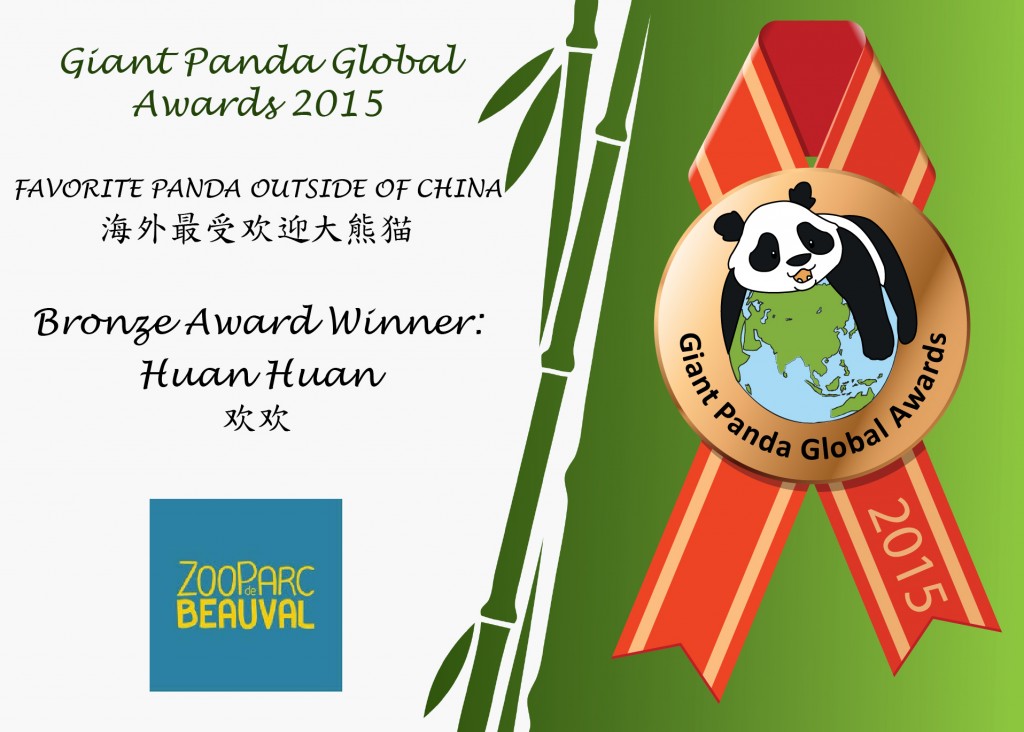 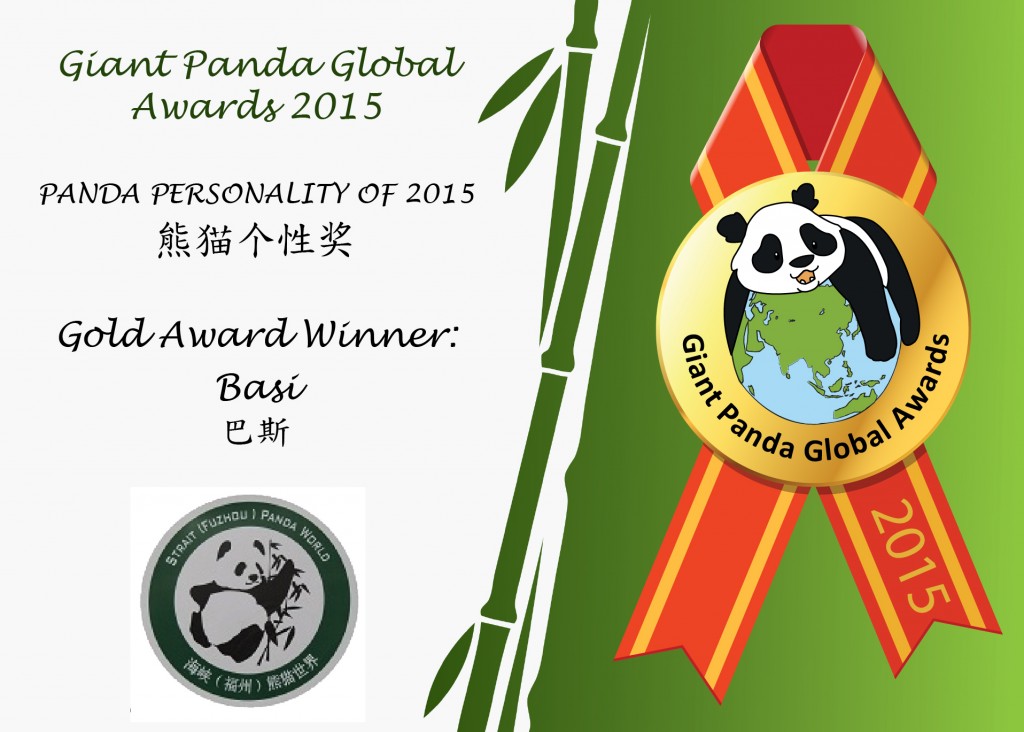 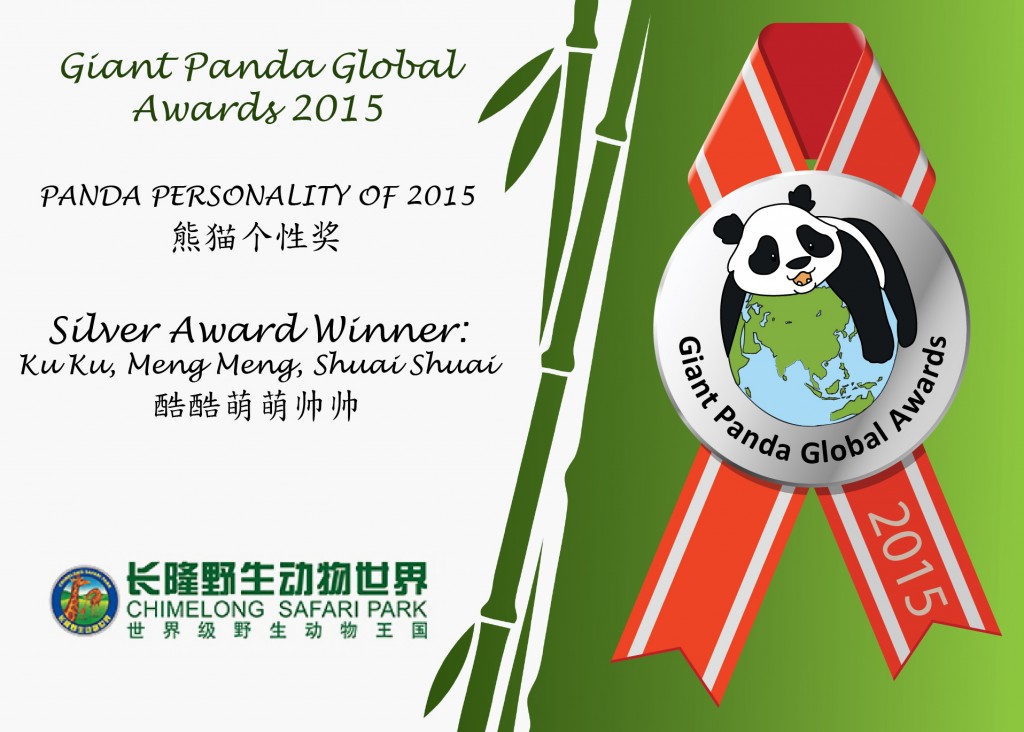 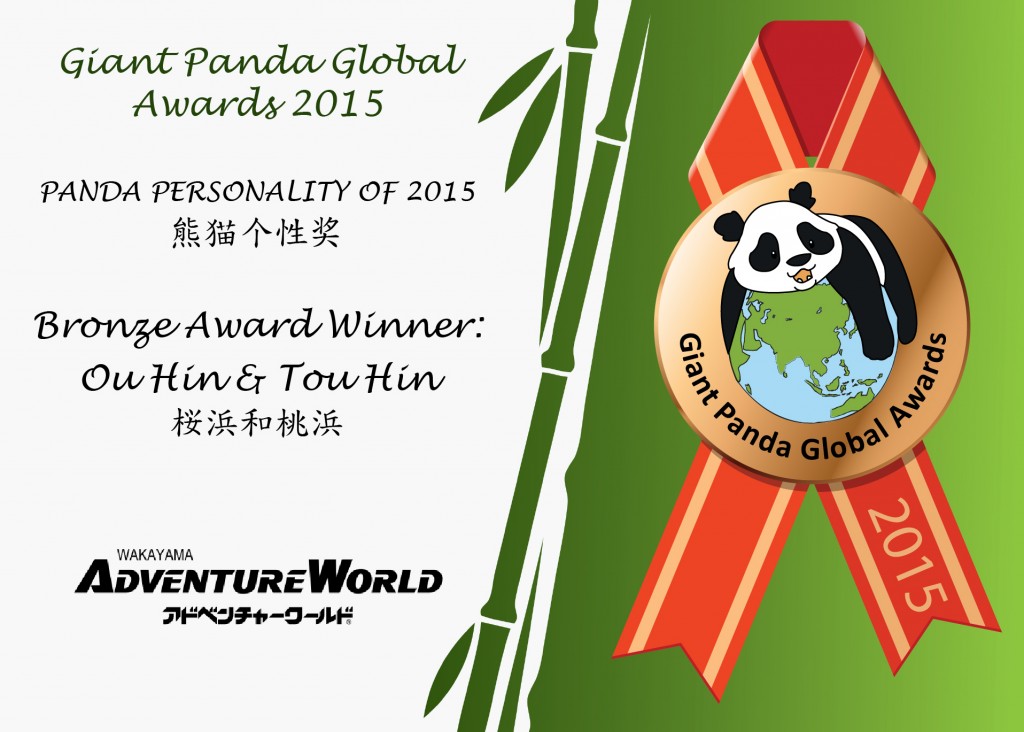 Huang Yan, one of the CCRCGP directors, who is responsible for the reintroduction programme became “Human Panda Personality of 2015”. Chen Yu Cun, the director of Fuzhou Panda World won Silver. His dedication and passion for Basi and his Fujian Panda Base are inspiring for many panda lovers around the world. The Bronze Award went to another friend of Basi, Georgeanne Irvine. Her book “The visit of two pandas to the San Diego Zoo” is a must have for panda fans. The book brings you back to a unique experience in 1987-1988, Georgeanne relived all her stories at Basi’s big party. 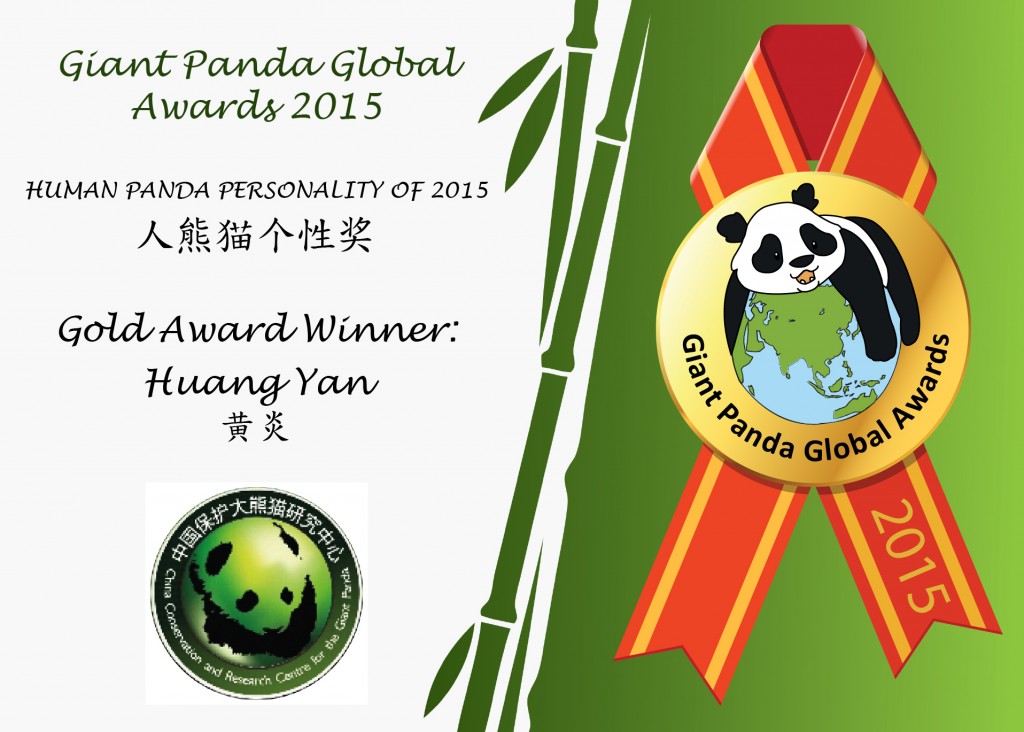 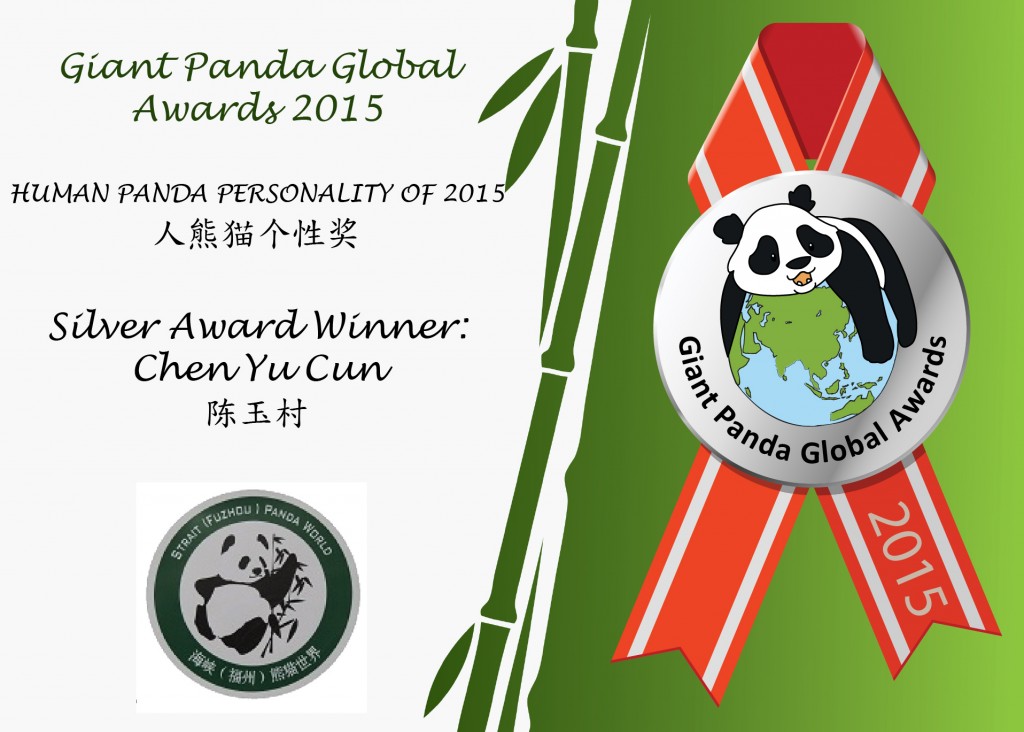 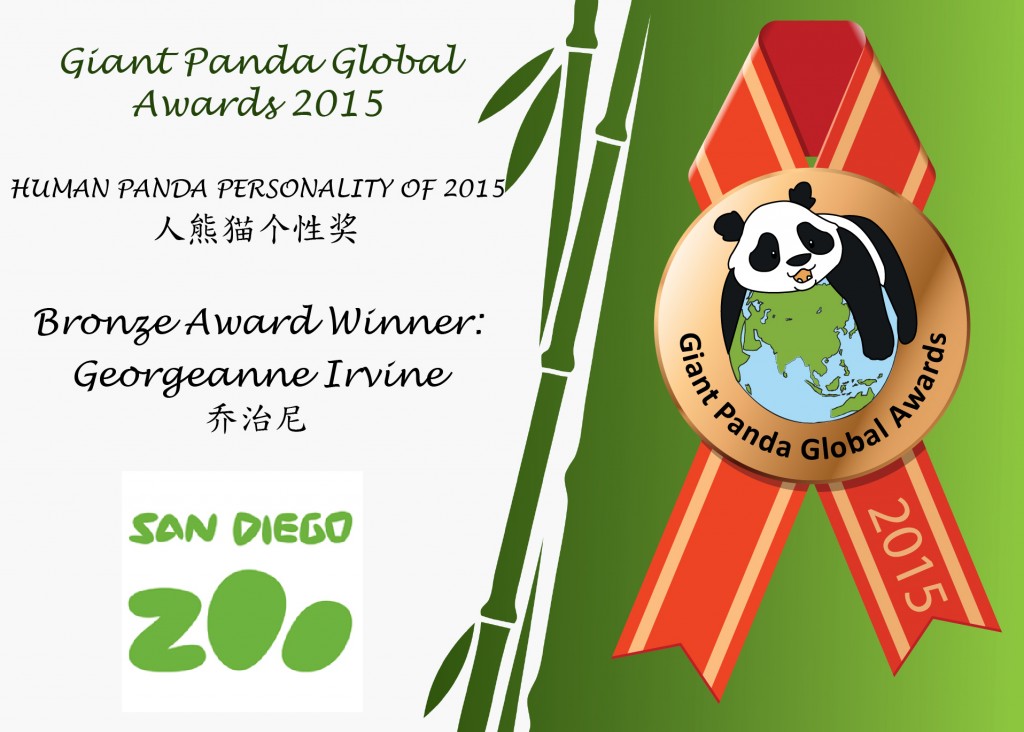 The Gold Award for “Panda Keeper of the Year” went to Chen Min of the Chengdu Panda Base. Chen Min is an experienced nursery keeper who has raised panda cubs in China, Spain and most recently Canada. The Silver Award went to Nydzam Zainudin, the keeper leader of Zoo Negara Malaysia’s panda house. Marty Dearie of the Smithsonian’s National Zoo finishes on podium place number three. 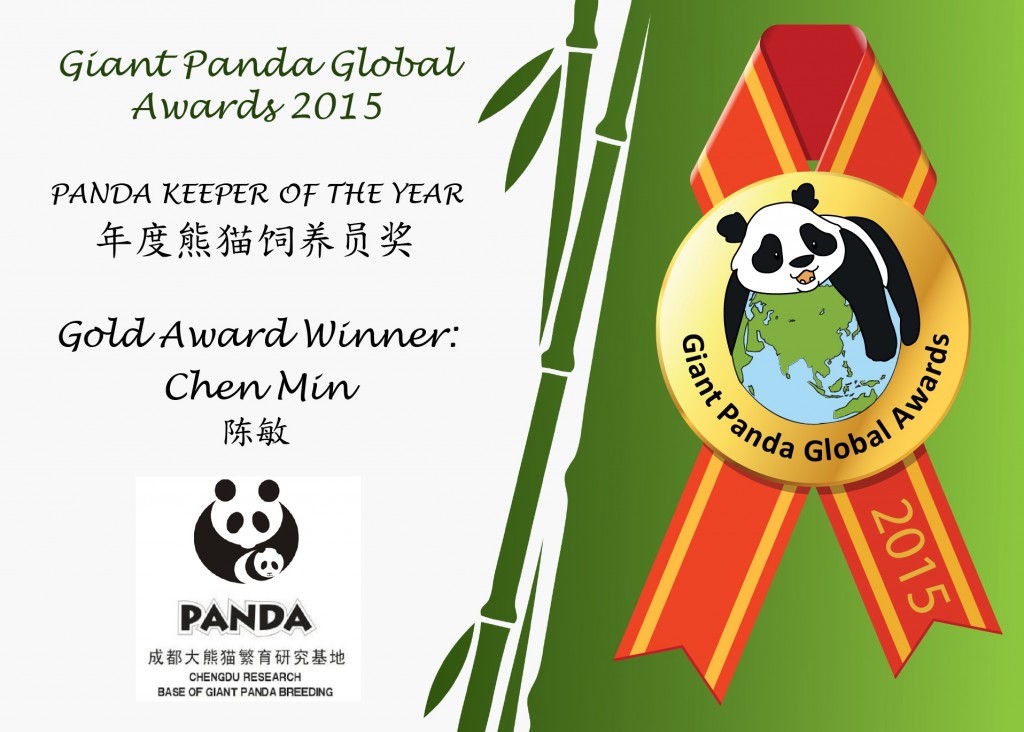 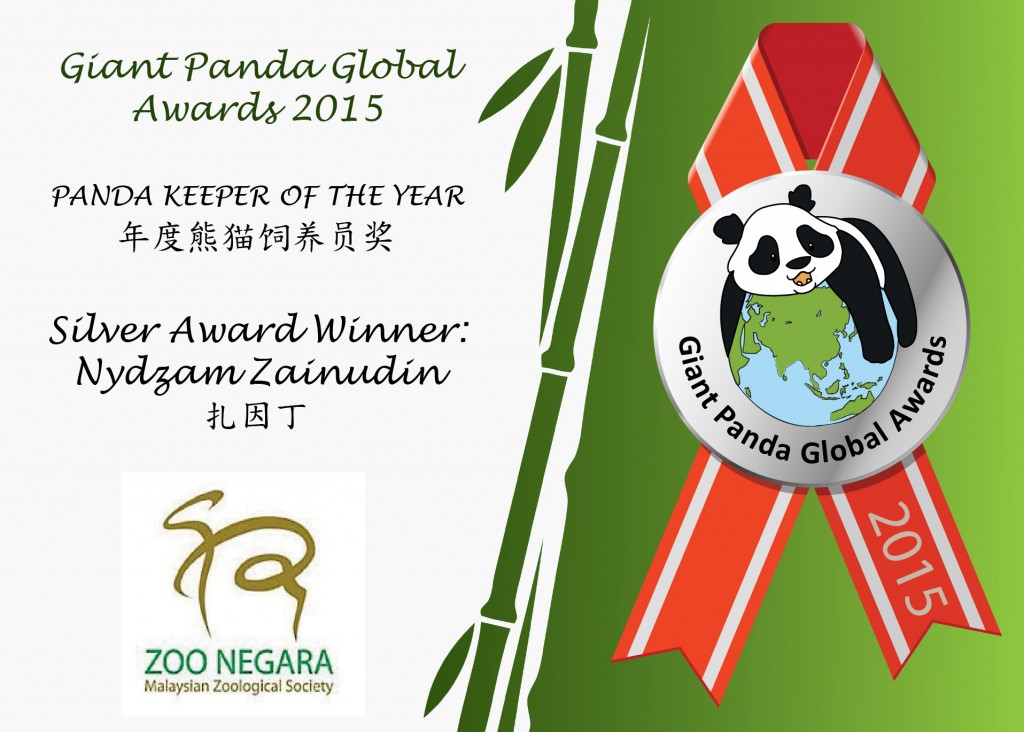 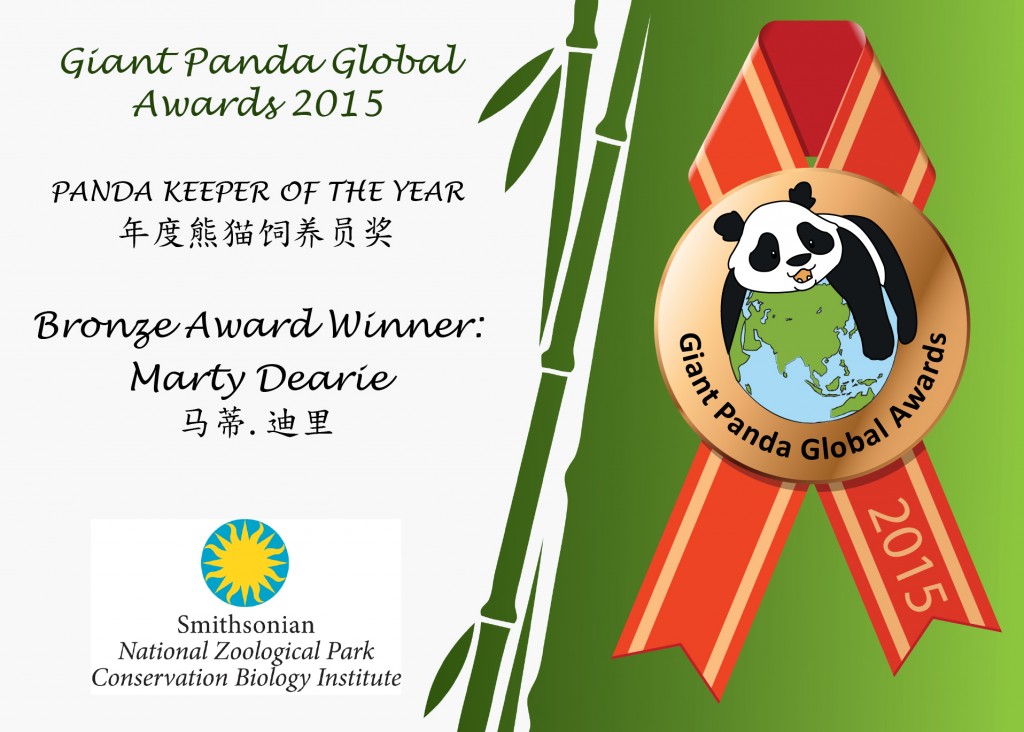 The category “Veterinarian of the Year” has been added to the Giant Panda Global Awards for the first time this year. The Gold Award went to the Smithsonian Conservation Biology Institute’s Dr. Copper Aitken-Palmer. Dr. Aitken-Palmer is an expert on the male panda reproduction and the foreign veterinarian with the most successful giant panda artificial inseminations on her record. She was one of the organisers of a series of panda veterinary workshops. The Silver Award went to Dr. Wu Honglin, one of the vets of CCRCGP. When you see a photo of a veterinary exam on a panda in the release program, you will see Dr. Wu. The Bronze Award went to Dr. Romain Pizzi, veterinary surgeon at the RZSS Edinburgh Zoo. He specialises in invasive “keyhole” surgical techniques on wild animals and launched an online portal for information about surgery on giant pandas. 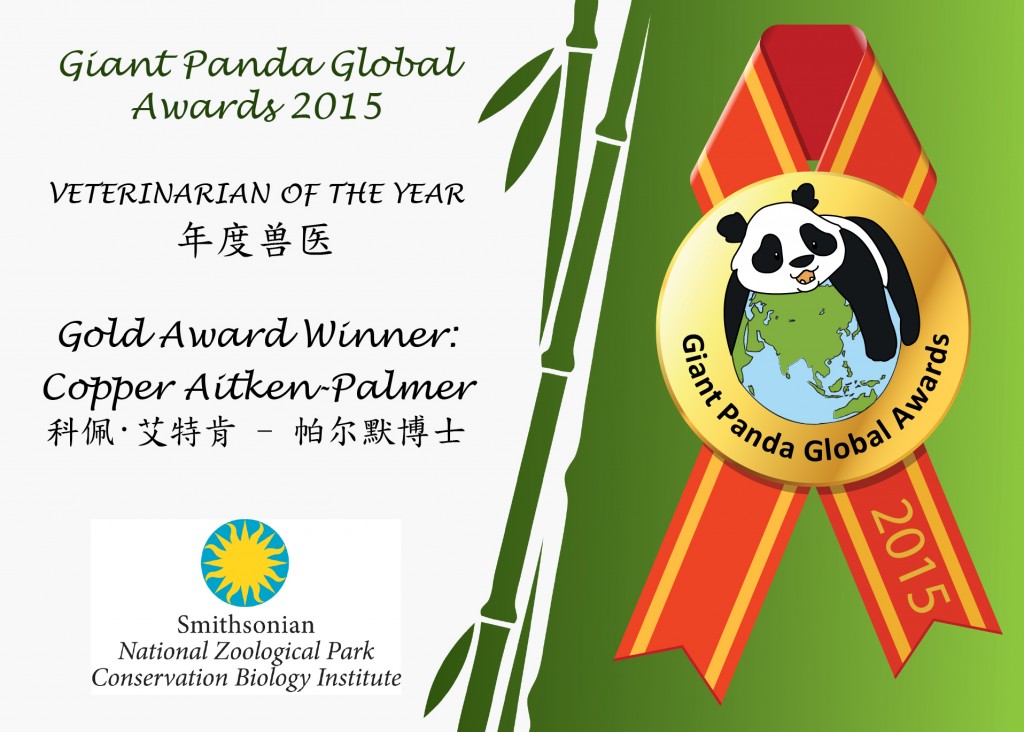 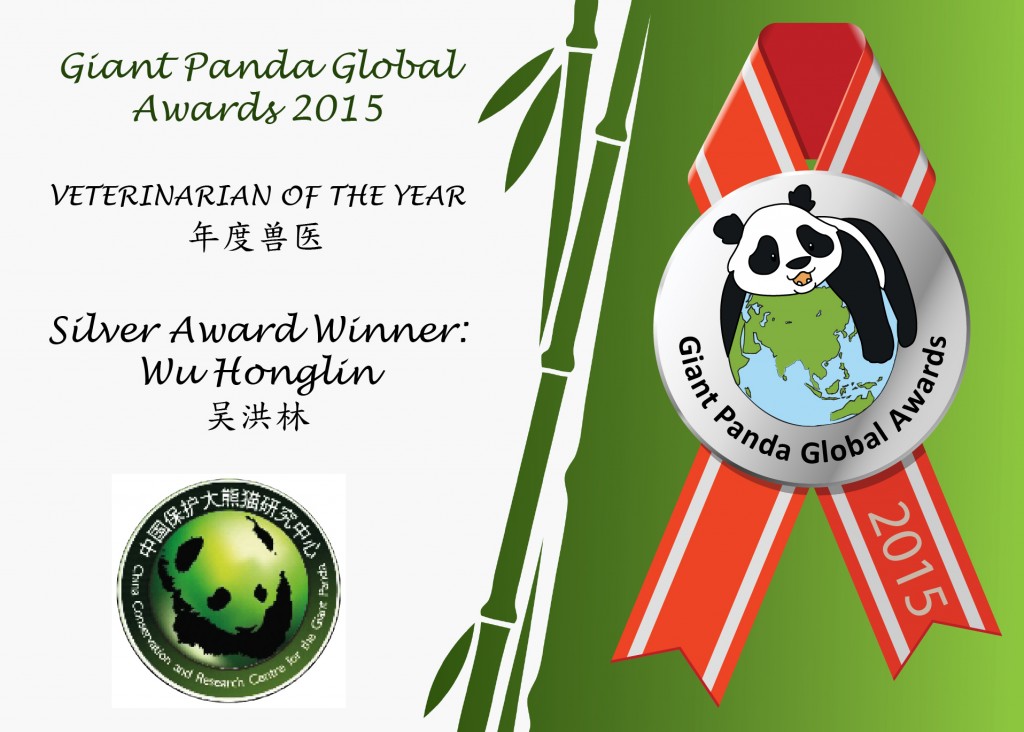 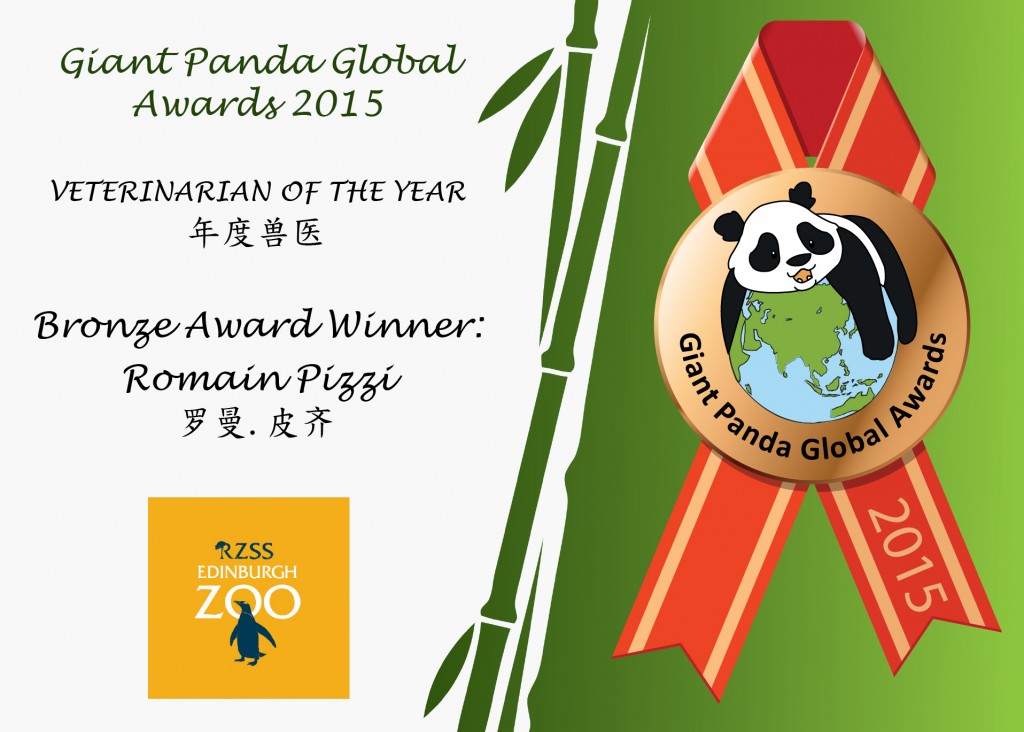 Toronto Zoo’s panda exhibit, with the Giant Panda Interpretive Centre, won the Gold Award for “Most educational panda zoo enclosure”. This climate-controlled centre features many interpretive and interactive elements for visitors to enjoy year round. Interpretive themes will include Eating Bamboo, Threats to Giant Pandas, and Saving Giant Pandas. The David M. Rubenstein Family Giant Panda Habitat at the Smithsonian’s National Zoo with three hughe outside yards that were designed to mimic the pandas’ natural habitat of rocky, lush terrain in China won the Silver Award. Memphis Zoo’s “CHINA” Exhibition, home of Ya Ya, Le Le and many other chinese animals received the Bronze Award. 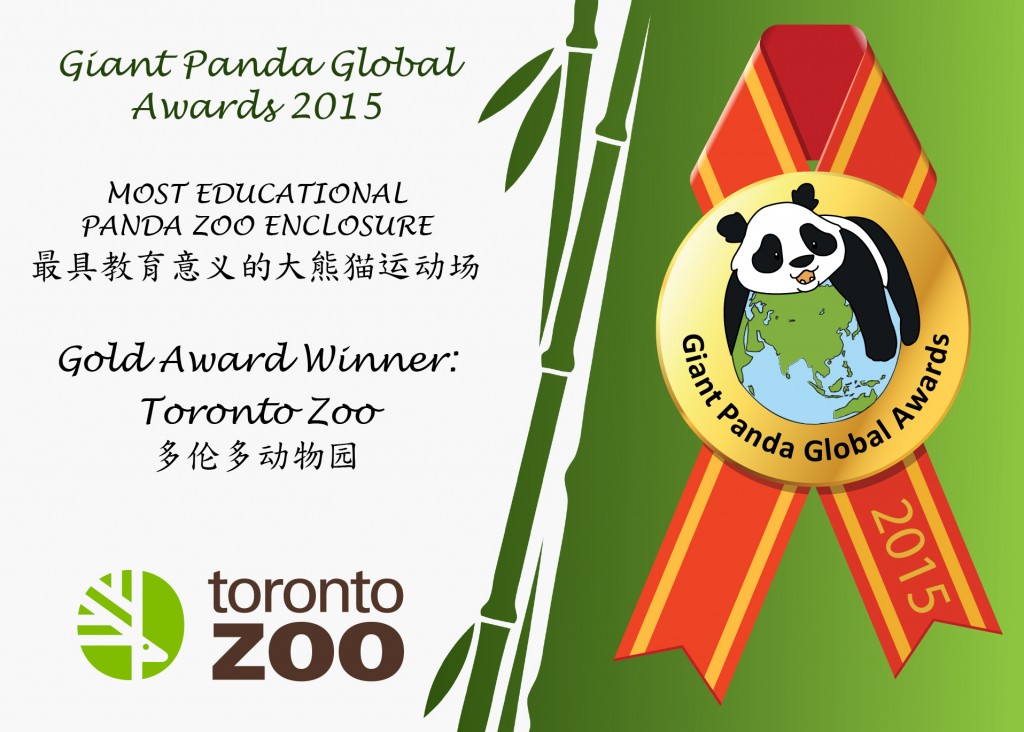 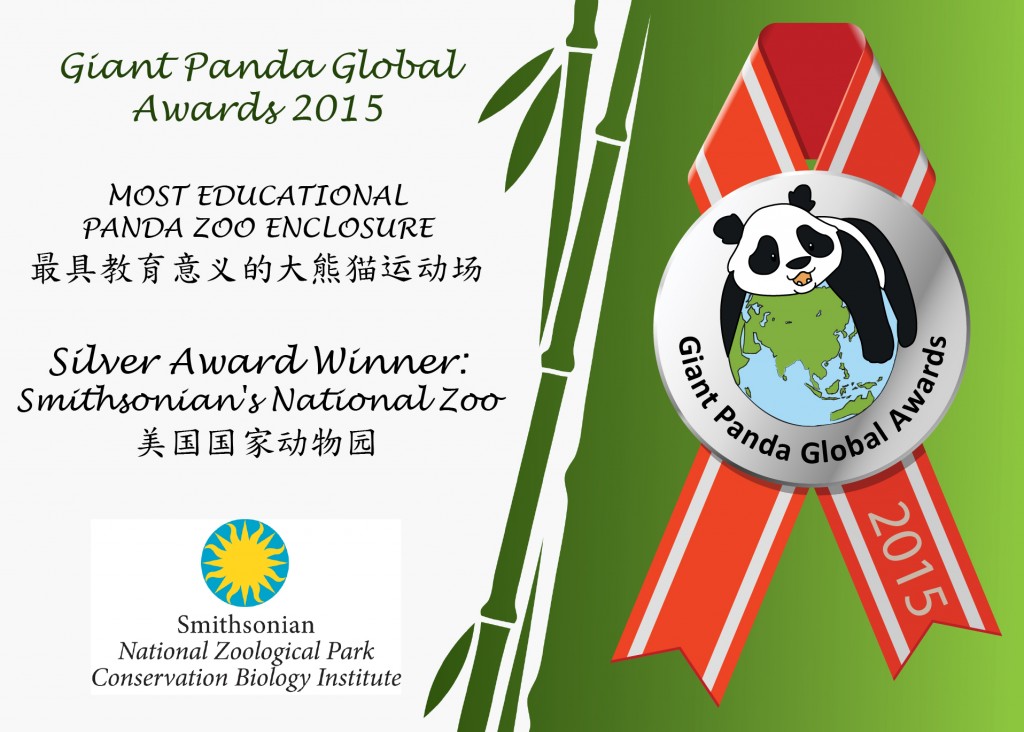 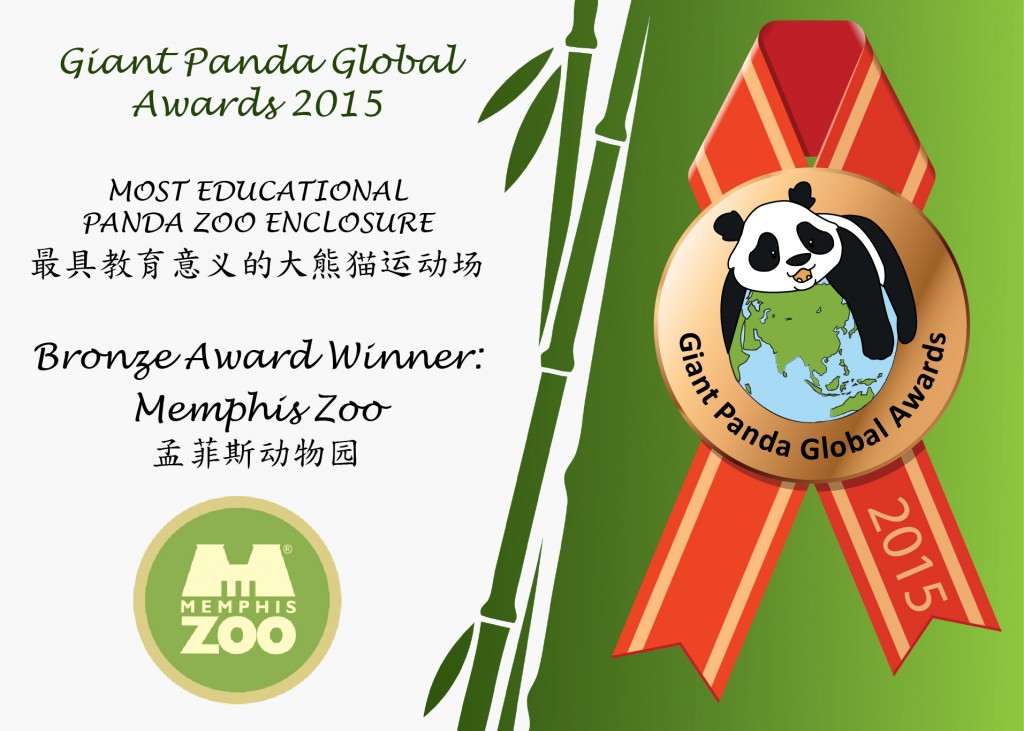 2015 was a very spectacular year for giant pandas with many special moments. But ofcourse, only 3 of the 10 nominees could win an award for “Panda Moment of the Year”. The Bronze Award goes to the Toronto Zoo for the birth of Canada’s first giant panda cubs. The Silver Award goes to the Smithsonian’s National Zoo and first ladies Peng Liyuan and Michelle Obama for the naming ceremony of Bei Bei. The Gold Award goes to the State Forestry Administration of the People’s Republic of China for the results of the Fourth Giant Panda Census. 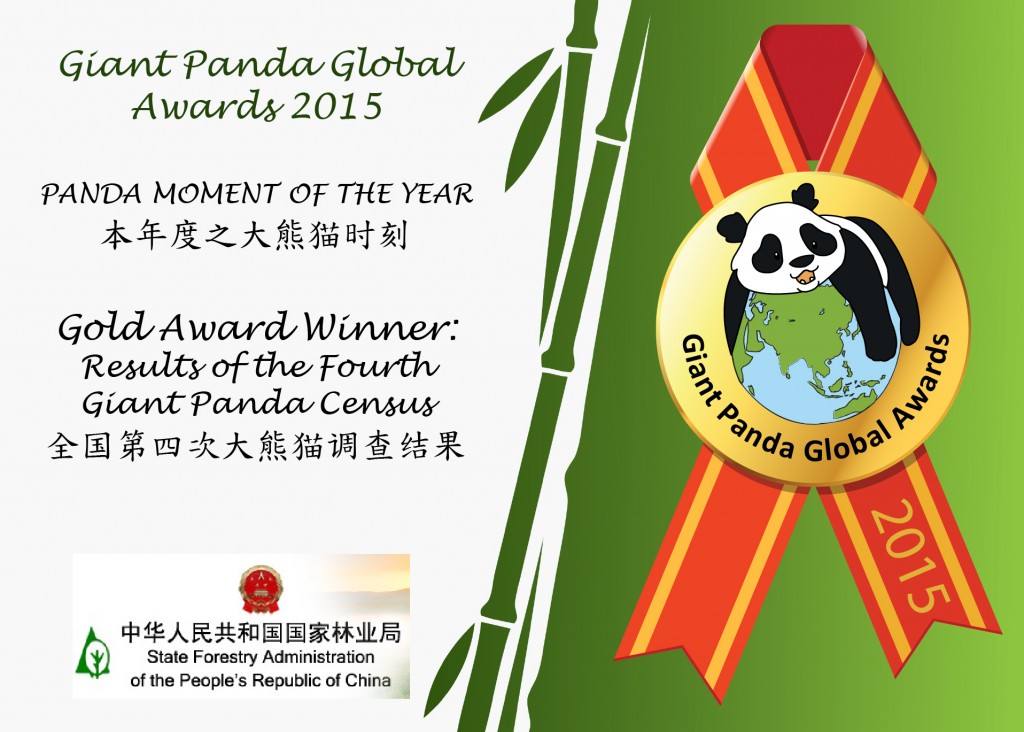 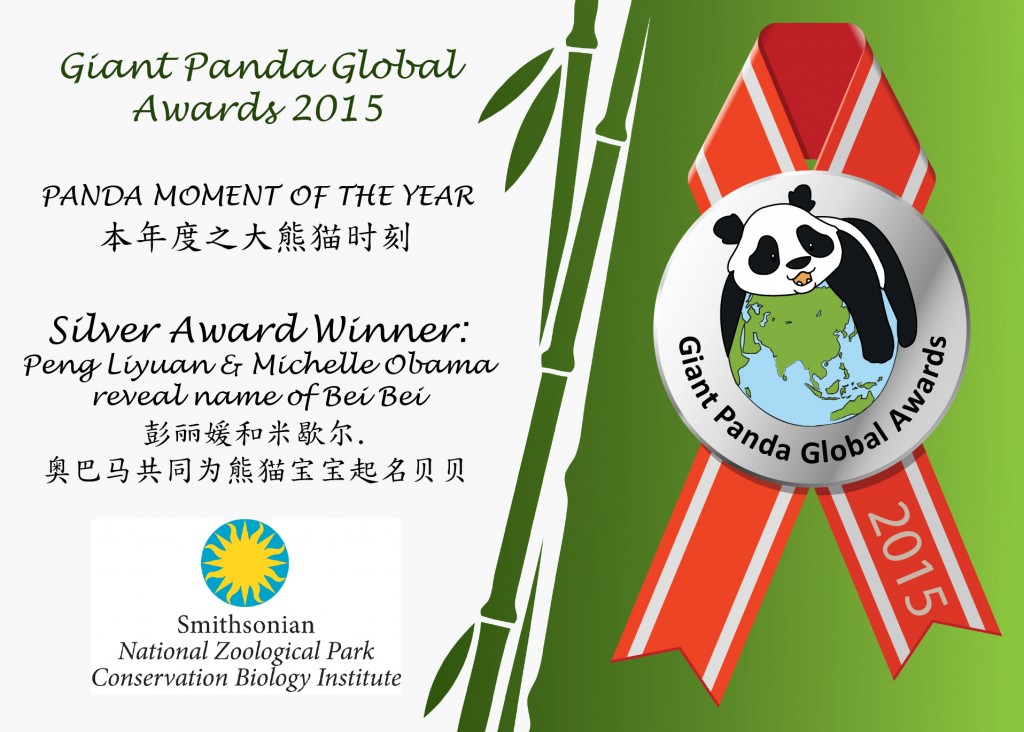 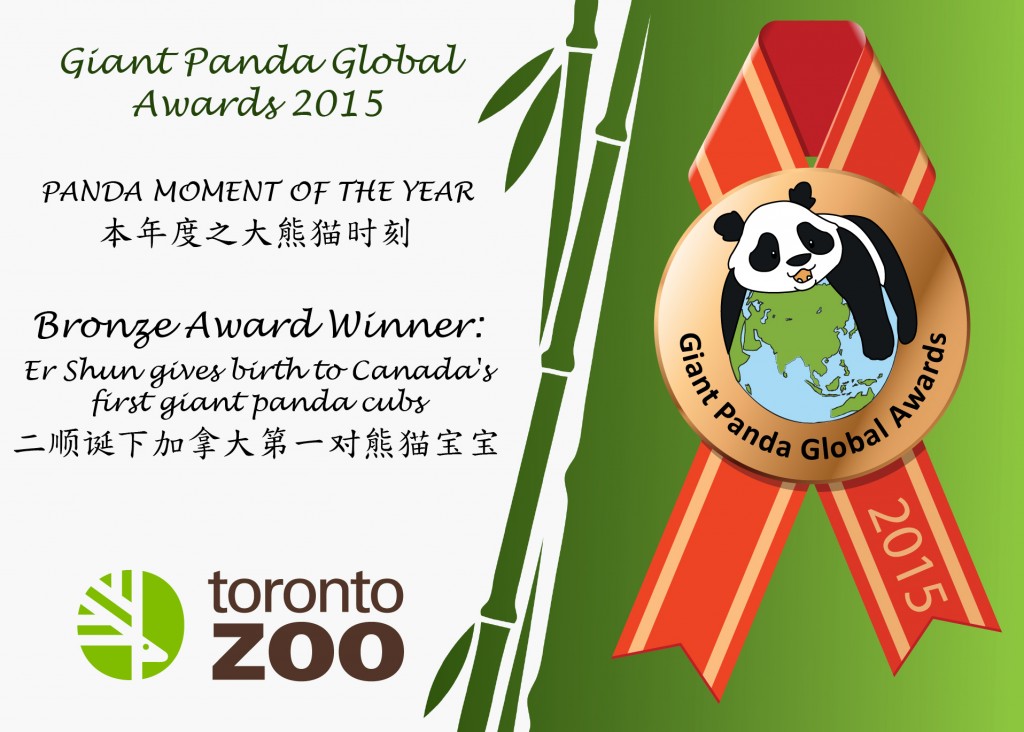 There are only 1.864 giant pandas left in the wild. The captive population today exists of 425 individuals. The work of the Chinese panda experts on ex-situ and in-situ panda conservation is a sign that there is hope for this endangered species and for many others. The giant panda is a real ambassador for wildlife and many other species benefit from the efforts that are made in the panda conservation field.

I would like to congratulate all winners and thank all voters who have supported the Giant Panda Global Awards, an event created to promote panda conservation, education and research activities.