Hua Jiao reintroduced into the wild 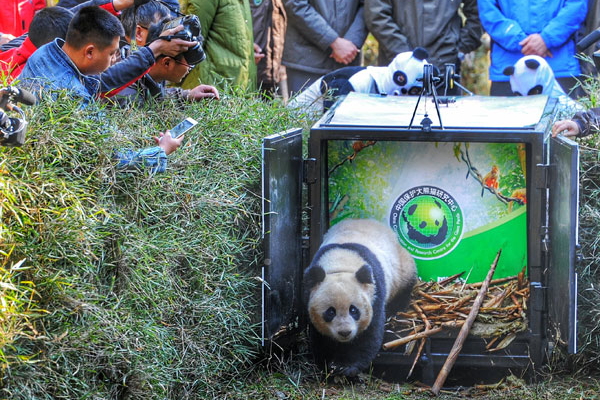 Born at a semi-wild training center at the CCRCGP Wolong He Tao Ping Base in July 2013, Hua Jiao is female and two years old. She was released into Liziping Nature Reserve on Thursday afternoon.

Hua Jiao was declared in good shape and ready for release after a thorough physical examination at the China Conservation and Research Center for the Giant Panda (CCRCGP) on Wednesday afternoon.

Hua Jiao was reintroduced into the wild on November 19, 2015.

During the examination an ID chip was implanted under her skin and she was fitted with a GPS collar. These items will help researchers monitor her, just as they did for her elder brother Tao Tao, who was released into the same reserve in 2012.

“Tao Tao is doing well. We wish Hua Jiao the same luck,” said Huang Yan, who is CCRCGP deputy chief engineer and is in charge of the wilderness-training program. However, Huang said, there would be little chance of a family reunion, as pandas are generally solitary.

“In addition to the inevitable threats from natural enemies such as bears, leopards and wolves, our top concerns are that Hua Jiao is accepted by the local wild panda group and breeds successfully,” said Huang.

Habitat loss and fragmentation have separated panda groups in nature. Huang said China has at least 30 isolated groups each with less than 50 pandas.

As such, wild pandas have limited mating options and inbreeding is highly possible.

“Without help, the wild panda groups may die out within a century,” said Huang.

Before her release, Hua Jiao had been trained to survive in the wild. She was raised by her mother, who taught her basic skills, such as how to climb. She was then exposed to dangers such as mud-rock flows, snow and rainstorms, all the while learning from her mother. She also learned to fear humans and to hide from them, and to distinguish enemies from her own kind.

Hua Jiao is the fifth Giant Panda to be released. The first was Xiang Xiang in 2006, who died 10 months after her release after fighting with other wild animals for food and territory.

Xue Xue, the most recent panda to be released, died one month after “going wild” in October 2014.

“We have taken lessons from Xue Xue’s case. Her parents are both bred in captivity and they lacked survival skills, [however, we believe] Hua Jiao, whose parents were both born and live in the wild, will do better,” said Huang.