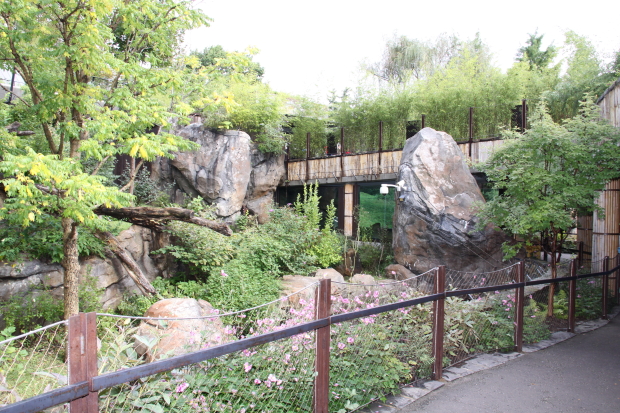 David Rubenstein donated $4.5 million to the Smithsonian’s National Zoo for the giant panda program. In appreciation, the giant panda complex—home to giant pandas Tian Tian (male) and Mei Xiang (female)—will be named the David M. Rubenstein Family Giant Panda Habitat for the next five years. In addition, young conservation biologists in the U.S. and China who are awarded National Zoo fellowships for their work to save this endangered species will be named “David M. Rubenstein Fellows.” 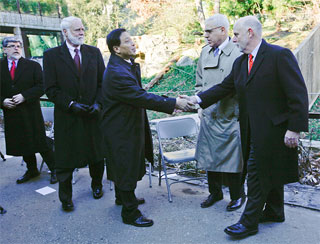 The gift will be used to fund conservation efforts in China, reproductive science, professional training programs, giant panda care at the Zoo, upgrades to the Zoo habitats and public education.

“On behalf of the Zoo Advisory Board, we are most grateful to David for his generous gift, which keeps the beloved giant pandas at the National Zoo for Washington, D.C., and all Americans to enjoy,” said John Marriott, chair of the Smithsonian’s National Zoo Advisory Board. “More importantly, his generosity will enable us and our Chinese partners to continue our conservation work to give this critically endangered species the chance to survive in its native habitat.”

Rubenstein, co-founder and managing director of The Carlyle Group, has been a member of the Smithsonian’s Board of Regents since 2009. “We are honored to be part of a cherished program that brings joy to millions of people and draws together two great nations working to preserve these magnificent and gentle giant pandas,” said Rubenstein.

The gift allows the Zoo’s animal care and the Smithsonian Conservation Biology Institute’s scientific team to proceed with the five-year science plan established with their Chinese colleagues from the China Wildlife Conservation Association. The science plan has specific goals: to examine the creation and impact of corridors to link fragmented habitats that will benefit giant pandas and other wildlife species, including promoting genetic diversity; examine how to restore habitats, especially those where pandas appear to be making a comeback; provide advice on giant panda reintroduction; examine the potential impact of transmissible diseases on giant pandas and other wildlife species, including providing advice on implementing new programs associated with a Wildlife Disease Control Center being built in Sichuan Province; and continue research on giant panda reproduction and management, because, although there has been major success in Chinese breeding centers, some pandas still experience reproductive challenges.

This last goal extends to the Zoo’s pair of pandas who have only produced one cub, Tai Shan, via artificial insemination in 2005. SCBI scientists evaluated all panda breeding records and found that no female individual has successfully reproduced after five consecutive failures. Since Mei Xiang falls into that category, the SCBI team formed a 2012 breeding plan with some variations. “It’s important that we use modern biomedical tools to try and make sure that every genetically valuable individual panda reproduces,” said Pierre Comizzoli, SCBI reproductive physiologist.

The 2012 giant panda breeding plan was done in collaboration with Chinese colleagues. Most notably, the Zoo will receive frozen semen from the San Diego Zoo this year. The frozen semen will be from Shi Shi (now deceased). The frozen semen will be used only in the event that the pandas do not mate successfully and if Tian Tian’s semen is not of sufficient quality for an artificial insemination. Additional details of the breeding plan include: panda keepers continue to house the pandas separately as they would live in the wild although they are rotated throughout all the yards, panda keepers continue the animal training and exercise regimens to improve their stamina, alterations are being made to the facility to create smaller and more manageable breeding areas, all unnatural night light in the building has been eliminated and the indoor panda exhibit is closed to the public at 4:30 p.m.

Tian Tian, the male panda, has already exhibited preliminary rutting behaviors (“powerwalking”/patrolling, urine hopping, scent marking and some vocalizations). Keepers expect these behaviors to increase over time. Mei Xiang has yet to exhibit any estrous behaviors. Last year at this time, she was beginning to show early behaviors such as scent marking, restlessness and vocalizations.