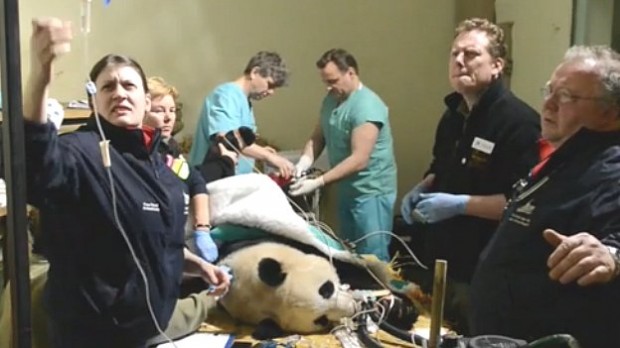 The Royal Zoological Society of Scotland (RZSS), the conservation charity that owns and manages Edinburgh Zoo, is proud to announce that it carried out the first artificial insemination procedure on a giant panda in the UK on Sunday morning.

Following advice from Chinese panda mating expert, Professor Wang from the China Conservation and Research Centre (CCRCGP); a team of world experts in artificial insemination and reproduction management joined RZSS’s vets, scientific and animal staff to carry out the procedure as part of the overall global panda conservation effort.

Tian Tian had ovulated on Saturday. Her 36 hour breeding window showed she wanted to mate, but her behaviour suggested she would not be responsive to our male panda, Yang Guang; putting them together potentially posed risk of injury.

The procedures started in the early hours of Sunday morning and a combination of frozen and fresh semen was used. Frozen semen has an advantage over fresh semen in that the sperm cells are already activated (“capacitated”) which is important when fertilizing an oocyte (egg cell). Fresh semen has to be activated in the female genital tract and this happens as it moves up the vagina and into the uterus. Fresh semen from Yang Guang was preferable to use in the insemination as it is more motile than frozen semen which has had to be frozen and then thawed. In other words the sperm are most likely moving faster and will survive longer in the female genital tract than if frozen. However, there is a risk of anaphylactic shock or uterine spasm from the seminal fluid component of fresh semen (which contains proteins/prostaglandins) if it is placed directly into the uterus (as this was). The initial insemination using thawed semen therefore diluted the subsequent seminal fluid which was part of the fresh semen insemination thus reducing the risk of this happening. As there was not enough frozen semen from Yang Guang, his semen was augmented with that from another extremely genetically important panda called Bao Bao, who lived at Zoo Berlin from 1980 until 2012. Using multiple samples aligns with the panda’s natural mating strategy of having several different mates in order to maximise the chance of successful breeding.

“We were honoured to have gathered so many of the world leading experts on artificial insemination and reproduction management in animals at Edinburgh Zoo in the early hours of Sunday morning to help our own extraordinary team of talented veterinarians and animal keepers. This was ground-breaking science taking place for the first time in the UK. It would have been amazing if the pandas had mated naturally, however artificial insemination is the next best thing for the overall global conservation effort and the individual biology of Tian Tian our female. With every year that goes by where she does not become pregnant, it becomes harder for her to get pregnant naturally. Like IVF, artificial insemination is essentially an opportunity for science to give nature a helping hand. In the wild, female pandas will mate with several males within her 36 hour breeding window, giving her the best chance of successful conception, in the zoo this is not possible’.

“During the procedure, both Yang Guang and Tian Tian were sedated. Tian Tian was examined to confirm scientifically if she had definitely ovulated, which she had. Then based on the recommendation of Professor Wang, RZSS staff and world leading experts from the Leibniz Institute for Zoo and Wildlife Research (IZW) in Berlin: Professor Dr Thomas Hildebrandt, Dr Frank Göritz and Dr Joseph Saragusty; we worked together to carry out the procedure.

“Both pandas are doing very well and the procedures went very much to plan. After his procedure Yang Guang was up and moving within thirty minutes and back to normal within two hours; Tian Tian just taking slightly longer. Sunday morning saw Yang Guang back to his favourite things – eating and relaxing in his outdoor enclosure and Tian Tian ventured out this morning.

“The team of RZSS staff and international colleagues did a tremendous job over a protracted period and should be commended.”

Experts will not be able to confirm if Tian Tian is pregnant until late July or early August, as pandas practice delayed implantation where the fertilised egg will not necessarily implant into the uterus until sometime after conception. It is also common for them to have pseudo pregnancies. This means that while RZSS will continue to monitor hormone levels in Tian Tian’s urine, they will not be able to confirm a pregnancy until an ultrasound scan is performed.