A Conservation Priority: Children and Nature 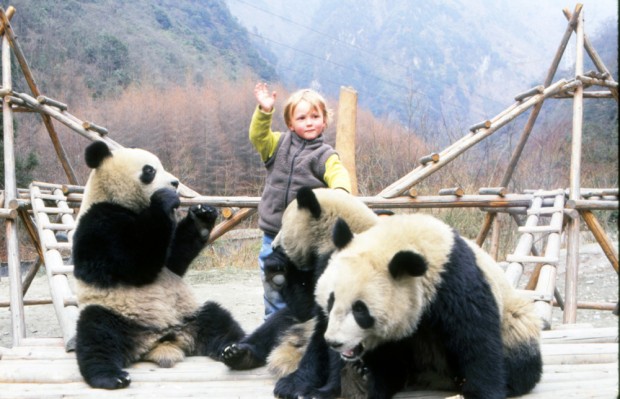 Megan Owen, a conservation program manager for the San Diego Zoo Institute for Conservation Research wrote this personal and touching post about conservation. A Conservation Priority: Children and Nature.

Back in 2000, I had the opportunity to take my family with me on a three-month research trip to the Wolong Giant Panda Center. At the time, my (then) three-year-old son was a handful, and our nanny had a hard time keeping up with him. While my husband and I were a bit panicked at first by his rambunctiousness, the keepers and staff at Wolong quickly took our son under their wing, and, as a result, he got to spend those cool winter days running around outside, with the steep mountains, bamboo forests, and Pitiao river providing the backdrop for his play and adventures. And, of course, there were many young panda cubs for him to call friends. Sometimes he had the opportunity to stand or sit eye to eye with a young panda, and I will never forget the look he would get on his face as he sized up his exotic comrades.

More than ten years later, and in a far less exotic setting, I saw that same expression—pride, curiosity, and excitement—on the face of my (now) three-year-old daughter as she picked a big fat grub out from under a planter box at our home near the Zoo. This plump invertebrate (whom she named Cornelia) was her best friend that morning, and for the rest of the day she made up stories about Cornelia’s life and family. Of course, during the course of her playtime with Cornelia, she got filthy dirty, scraped her knee, and wouldn’t eat lunch, but I couldn’t have been happier. The morning was well spent outdoors, investigating nature at a child’s pace.

Anyone who knows me will tell you that I love my job. And while I feel lucky to work in proximity to some of the world’s most amazing animals, the best part of my job is sharing what I’ve learned with children. Whether it is speaking to students who visit the Zoo, talking to my own children at the end of the day, or visiting children in their classrooms, I love the curiosity and awe they express when we’re talking about wildlife. I am consistently impressed with the knowledge many children possess about animals and habitats and the important insights they often make about our role in changing the lives of wildlife. And when I am invariably asked, “What can kids do to help save wildlife?” I reply, “Go outside and play! Riding your bike is good for the environment! Playing tag is good for polar bears, but playing a video game is not.”

As I watch my own children grow up, I wonder what their connection to the outdoors will be. While we go camping often as a family, and I trundle the kids off to the beach at just about every opportunity, their outdoor play is structured very differently from mine. My family moved from Ann Arbor, Michigan, to San Diego when I was four years old, and I feel very lucky to have grown up where, and when, I did. Back then, parental supervision was often exemplified by a mother’s call of “Make sure you’re home before dark!” and the sound of a screen door swinging shut mid-sentence. This was, of course, especially true during the long summer months, but as a rule, every ounce of daylight after school was spent outside as well. The ocean cliffs and coastal canyons of southern California were my backyard, and while I admit that I did not spend any significant amount of time thoughtfully identifying the organisms and natural processes in my environment, I did acquire a lifelong love of being outside, getting dirty, and solving problems, all of which have served me well in life and especially in my professional experience as a biologist.

The goal of conservation is to protect biodiversity so that the natural world of the future is as rich, expansive, and varied as that of the past. Here at the San Diego Zoo Institute for Conservation Research, we all employ science toward that end. And what better way to secure that future than to connect children to nature so that they may grow up with a fundamental appreciation for being outside and an inherent understanding of the value of nature.