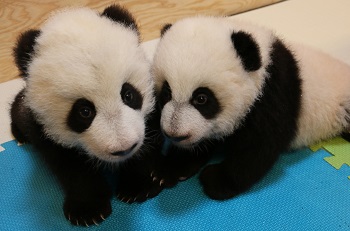 The Toronto Zoo is very excited to announce that the giant panda cubs born on Tuesday, October 13, 2015 are a boy and a girl. The older giant panda cub born is male and the younger twin is female.

Telling the sex of a giant panda based on their appearance is not very straightforward, or reliable. To determine the sex of the cubs at the Toronto Zoo, staff collected cheek-cell samples from the cubs with a small swab on Thursday, January 28, 2016 and drove them to Trent University, Natural Resources DNA Profiling and Forensic Centre. The forensic team at Trent used DNA sexing protocols developed by the Smithsonian Conservation Biology Institute, Center for Conservation and Evolutionary Genetics. The protocol involves sequencing a short fragment of the zinc finger protein gene (males have two different copies of this gene region, X/Y whereas females have two identical copies, X/X).

“The Toronto Zoo is grateful for the ongoing collaboration with the Smithsonian National Institute as we work together and share critical learnings through the giant panda conservation breeding program,” said Maria Franke, Curator of Mammals at the Toronto Zoo. “We have also had a long ongoing relationship with Trent University on a number of different research projects and we want to thank them for their partnership on this project”.

“We have had a long productive research and educational relationship on conservation with the Toronto Zoo and we were happy to help with identifying the sex of the panda cubs,” said Brad White, Canada Research Chair in Genetics, Director of the Natural Resources DNA Profiling and Forensic Centre and Professor at Trent University.

“We were delighted to offer our expertise on DNA gender identification of pandas and to hear that our protocols worked well for Brad White and his team. Genetic methods provide important information for breeding critically endangered species,” said Dr. Robert Fleischer, Smithsonian Conservation Biology Institute.

The Toronto Zoo is involved in many research projects for the giant panda conservation breeding program and in the wild to assist in saving this endangered species. We would also like to thank the Chengdu Research Base of Giant Panda Breeding and Chongqing Zoo for partnering with the Toronto Zoo on this important program.