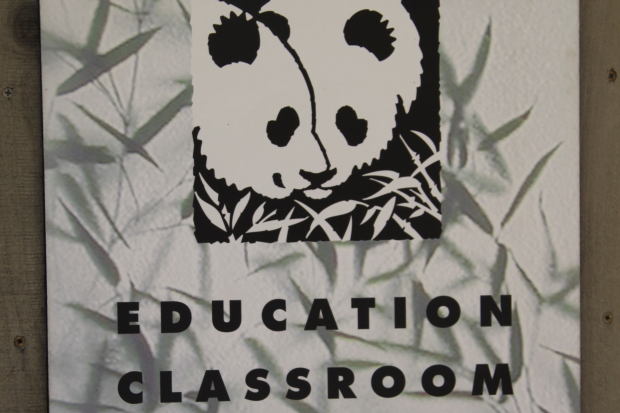 As we work our way into the month of August, many of you have been wondering about the status of the San Diego Zoo’s panda matriarch, Bai Yun. In recent years, she had already given birth by this date, and yet this time around we haven’t even been able to announce to you that she is indeed pregnant. I thought I would take this opportunity to discuss some of the reasons why pregnancy in pandas is a complicated affair, and what goes into the determination of a pregnancy. In this post, I’ll tackle one of the most interesting parts of the process with pandas: embryonic diapause.

Embryonic diapause, also known as delayed implantation, is an interesting biological event that comes into play after breeding occurs. In diapause, the female’s ova (eggs) experience a few rounds of cell division shortly after fertilization, and then development of the potential fetus arrests. This means the offspring virtually stops growing in the uterus and instead free-floats without growth until the time is right for it to implant in the uterine wall. Until implantation, the fertilized egg (called a blastocyst at this stage) cannot gain the important nutrition it needs to finish its transition into a fetus.

Pandas are not unique for experiencing diapause; in fact, it’s a phenomenon common to about 100 different types of mammals, from bears to weasels. We don’t yet understand what triggers the blastocyst to implant and begin growth in earnest, although scientists suspect photoperiod may play a big role. However, one of the big consequences of diapause in pandas is that this phenomenon requires us to wait until the period of delayed implantation is over to begin to see indicators of pregnancy behaviorally, physiologically, or via ultrasound.

The wait time can be variable from year to year, even with the same female. In Bai Yun, for example, we have observed total pregnancy lengths that have varied from 101 to 150 days. Since the length of time it takes to gestate a panda fetus from implantation to birth is thought to be fairly constant at about 50 days, the variation in pregnancy lengths most likely reflects the variation in diapause length for each of her pregnancies.

As the period of diapause comes to a close, hormone monitoring detects a rise in progestins that is probably associated with implantation. It is that rise in progestins that allows us to know that the female panda is undergoing a physiological preparation that could lead to birth, and it drives many of the behavioral and physiological indicators that are associated with pregnancy. However, once we transition out of diapause, we are subjected to another complicating factor in panda pregnancies: the possibility of pseudo-pregnancy.

Why is pregnancy in pandas such a complex affair? On Friday, we reviewed embryonic diapause as a factor in adjusting the length of panda pregnancies (see post Panda Pregnancy: Embryonic Diapause), and today I’ll describe another interesting aspect of their reproductive strategy: pseudopregnancy.

First, a definition: what is pseudopregnancy? Sometimes known as a “false pregnancy,” a pseudopregnancy occurs when a female exhibits the signs and symptoms of pregnancy when in fact she is not experiencing one. Like embryonic diapause, pseudopregnancy is not a phenomenon limited to pandas; it has been observed in mice, dogs, and even humans.

In pandas, the signs and symptoms of pregnancy that also occur in a pseudopregnancy include a decrease in appetite, a decrease in activity level, and even physiological changes to the genitalia. The onset of these changes in a pregnant female follow the rise in progesterone noted after the period of embryonic diapause, when the blastocyst implants in the uterus. But here is where it gets tricky: pseudopregnant females also experience a rise in progestins. It is what is driving their behavioral changes, too.

In many animals, the way to detect pregnancy is to look for the presence of progestin byproducts in the urine, feces, or blood. In a panda, if you find progestins in the urine of a female you can only say definitively that she is either pregnant or pseudopregnant. So far, we haven’t been able to identify a way with progestins to tell for sure if she is gestating a fetus.

Over the years, panda researchers have puzzled over this. What is really going on here? Is it possible that pseudopregnant females were actually bears that had, indeed, gotten pregnant but miscarried before the birth? That is certainly possible, and Bai Yun has shown us via ultrasound that she has three times carried twins only to give birth to a singleton. Clearly there is fetal death occurring in utero from time to time. It is entirely possible that many “false” pregnancies would retrospectively be classified this way, had ultrasound technology been more available in the past.

However, it is also true that in some cases, pseudopregnancy has been noted in females who had not even had the chance to breed. Thus, for those females, there was no possibility of a pregnancy (or miscarriage), and they went through the behavioral motions anyway.

Why would a female panda experience the signs and symptoms of pregnancy even if she didn’t give birth? We aren’t entirely certain, but here is one theory: because it doesn’t cost them much to do so. From an energetic perspective, it doesn’t take much effort to slow down and allow your body to become physiologically primed to gestate a panda fetus. Cubs only grow for about 50 days, which doesn’t require a long-term commitment. And if you are a panda, which only mates once every two to three years while raising a single cub in between, it is important to have that pregnancy “take.” If you miss a year, it’s a big loss to your lifetime reproductive output. When the typical lifespan of a wild panda is no more than 20 years, and a female isn’t fertile until at least 5 years of age, she can only rear about a half dozen cubs in her lifetime. Losing one has a big impact on her overall reproductive success. In the end, it could be as simple as a little cost-benefit math equation: pandas can’t afford to lose the chance to reproduce, and it doesn’t cost them much to be prepared.

Embryonic diapause makes it difficult to assess when we should expect a birth in the time shortly after breeding. Pseudopregnancy insures that we must interpret our progesterone and behavioral indicators with caution. How, then, do we actually confirm a pregnancy in pandas? I’m sure you have some idea, but there is also some new and exciting research on that front.

After a successful breeding season in which we are fortunate enough to realize one or more breeding sessions between Bai Yun and Gao Gao, we then shift into “wait and see” mode. During this time we wait out the period of embryonic diapause (see post, Panda Pregnancy: Embryonic Diapause). Then, once progestins begin to rise, and Bai Yun’s behavior begins to change, we start to look for clues that help us determine if our female is pseudopregnant or will, in fact, give birth (see post, Panda Pregnancy: Pseudopregnancy).

In the past, there was only one tried-and-true method to distinguish between the two: witness a birth. If a female had a cub (or two), then obviously she was not pseudopregnant. So it was that staff at a panda facility would spend quite a bit of time observing a female, watching for signs of labor to confirm that a cub was imminent.

I recall sitting in a darkened observation area in the middle of the night for months on end back in 1998. We had artificially inseminated Bai Yun earlier in the year, and we had no idea if she was pregnant. We were also uncertain about the timing of any potential birth. For six months staff rotated through the area, and there was always someone whose job it was to watch Bai Yun. It was a 24-hour-a-day assignment. Alas, you know that Hua Mei was our first-born cub (in 1999), so I don’t have to tell you how those intense six months ended.

Things have improved quite a bit since then. The biggest change over the last decade has been our ability to visualize a panda fetus via ultrasound. Once our veterinarians are able to see a heartbeat in utero, it becomes quite clear that we are not witnessing a pseudopregnancy: the female obviously conceived, implanted, and began to grow a new little panda. Hua Mei provided our very first in-utero cub photo just three days before she was born. That was a very exciting day, and it’s one I will always remember very clearly! Where were you when the first panda fetal image was obtained?

Since then, our vets have been able to get visuals of our fetal cubs with great regularity, charting their development in utero much as an OB-GYN might do for a human patient. But there has been another exciting development in panda pregnancy detection: the advent of a ceruloplasmin test.

Ceruloplasmin is a protein that recently has been shown to be a positive indicator of pregnancy in pandas. And I mean recent: research on this detection method has been published only in the last few weeks, it’s that new! There are many promising things about this new test, but the most exciting is that it provides us with a way to distinguish pregnant from pseudopregnant bears. It may also help us make that distinction early on in a pregnancy. In the future, it should become a powerful tool for panda facilities to utilize.

So where are we with Bai Yun in 2011? We aren’t able to run her ceruloplasmin yet, as the test is so new there are some logistical issues to deal with in getting the results in a timely fashion. So we can’t tell you what is happening on that front. Our vets have been doing ultrasounds with Bai Yun for some time, and, to date, they have yet to confirm a heartbeat in utero. This means we are still waiting.

And I know you are, too. Until we have definitive information either way that Bai Yun will—or will not—be delivering a cub this year, we will all just have to get used to waiting. Just like the old days!